An Iranian parliamentary delegation met with speakers of Algerian Senate and People’s National Assembly, inviting them to an international organization on supporting Palestinian nation. 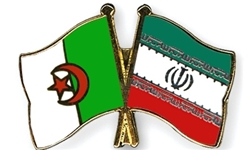 In a meeting with Mohamed al-Arabi Walad Khalifa , the Algerian official appreciated valuable efforts of Iran to hold the conference, and stressed vindicating Palestinians’ rights and confronting terrorism as well as establishing peace and security in the region.

In another meeting with Abdulqader Bin Saleh, the Algerian senate speaker stressed importance of the conference in ongoing circumstances, and said, "Algeria stands by the Islamic Republic of Iran in defending rights of Palestinian nation fairly.”

Outlining his country’s efforts to establish peace and stability in Libya and Mali, he said his country is ready to expand bilateral ties with the Islamic Republic of Iran.

The international conference on supporting Palestine is scheduled for February 21-22 hosting a number of parliamentary officials of Islamic countries.