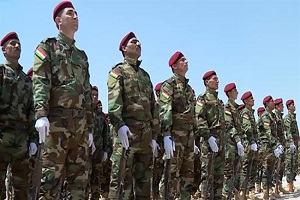 The clashes broke out on Friday between the fighters of the Peshmerga Rojava paramilitary force and the YBS, a PKK offshoot set up in the northern Iraq town, Reuters reported, citing Kurdish security sources.
There have been reports of deaths on both sides during the fighting, which involved heavy machinegun.

Peshmerga Rojava serves the Kurdish National Council, which is jointly funded by Turkey and the President of Iraq’s Kurdistan Masoud Barzani. The PKK has been waging a deadly war to carve out an autonomous region in southeastern Turkey.

In a statement on Friday, the YBS said the fighting began when the Peshmerga Rojava tried to seize its positions, and accused Turkey of instigating the violence. "It is a totally provocative initiative,” the YBS said.

"It’s our duty to destroy these terrorist organizations wherever they are,” the minister told reporters in Ankara, he added.

Turkey has for long been waging bombing campaigns against PKK strongholds in northern Iraq. It has also deployed troops to Iraq in a move roundly spurned by Baghdad, which says the military presence complicates its counter-terrorism operations.

While siding with the Kurdish paramilitary against the PKK, Ankara stiffly opposes the Kurds based in neighboring Syria, accusing them of having links with the PKK.

Turkey has likewise placed itself in direct confrontation with the Syria-based Kurds, known as the YPG, by deploying its troops to the areas taken by the Kurdish forces from Daesh.

Damascus, too, has called on Turkey to pull out its forces, calling Ankara’s intervention a violation of Syria’s sovereignty.