McCain calls on Trump to back up wire-tapping claim

U.S. Senator John McCain on Monday called for President Donald Trump to release any evidence supporting his claim the Obama administration wiretapped him while probing Russia's influence in the 2016 election. 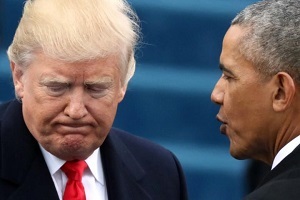 "I think the president of the United States, if he has any information that would indicate that his predecessor wiretapped Trump Tower, then he should come forward with that information. The American people deserve it,” McCain, a Republican from Arizona, told Reuters.

Jason Chaffetz, a Republican lawmaker who heads the U.S. House of Representatives Oversight and Government Reform Committee, told CBS in an interview on Monday that he had "not seen anything directly that would support what the president has said."

Republican Senator Lindsey Graham, who heads the Senate Judiciary subcommittee looking into allegations Russia meddled in the election, said the panel would be asking both Federal Bureau of Investigation Director James Comey and the Justice Department whether he had told the law enforcement agency this weekend to reject Trump's wire-tapping claim.

The White House said on Monday that Trump still has confidence in Comey despite his assertiveness in challenging Trump's claim that the administration of former President Barack Obama had wiretapped him.
Asked whether Trump still had confidence in Comey, White House Spokesman Sean Spicer said, "There’s nothing that I have been told by him that would lead me to believe that anything is different than what it was prior."

He was "almost 100 percent certain" Trump had not spoken to Comey since the Republican president made the allegation on Twitter on Saturday. "I'm not aware that that occurred," Spicer told reporters.

But, when asked during an early-morning interview on Monday with ABC's "Good Morning America" whether Trump accepted Comey's assertion, White House spokeswoman Sarah Huckabee Sanders said, "I don't think he does."

Trump has given no evidence for his claim that Trump Tower was wiretapped. The allegation is the latest twist in a controversy over ties between Trump associates and Russia that has dogged the early days of his presidency.
The wiretapping allegation hit U.S. stocks on Monday. Some investors worried that the affair could distract Trump from his economic agenda of introducing tax cuts and simplifying regulations that has powered a record-setting rally on Wall Street since the election.

The lack of detail on Trump's proposals, his isolationist stance and setbacks in filling his Cabinet have made investors question whether the post-election rally has run its course.

Democrats accused Trump of making the wiretapping claim to try to distract from controversy about possible links to Russia. His administration is facing FBI and congressional investigations into contacts between members of his campaign team and Russian officials.