Tehran, YJC. Qaemshahr representative in the Majlis says sanctions have contributed to the delay in offering the budget bill. 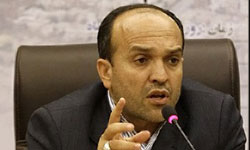 delivering the budget bill in the past years, adding "Inflation, pressure, sanctions, and volatile currency rate are the factors that count for the delay in budget bill.”

He also asserted that based on the 186th article the Integration Committee has had no right to reject the essentials of the bill.

"One of the strong points of the budget essentials for 92 [2013-14] was that things are being worked in it in a way to collect the unsettled liquidity,” he added.