TEHRAN, March 15, YJC - Scores of people have held separate protests in Bahrain to voice their support for distinguished Shia cleric Sheikh Isa Qassim, who has been stripped of his nationality and put on trial by the regime in Manama. 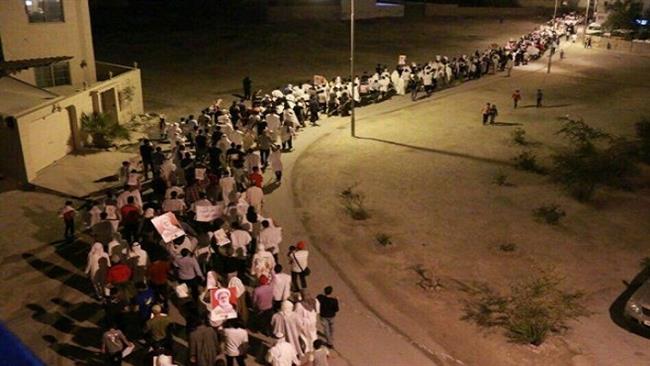 TEHRAN, Young Journalists Club (YJC) - Protesters took to the streets in the village of Ma’ameer, situated about 15 kilometers south of the capital, Manama, on Tuesday evening, and chanted slogans against King Hamad bin Isa Al Khalifah.
The demonstrators hurled stones and fireworks at regime forces, who responded with tear gas and stun grenades.
On Sitra Island, located five kilometers south of the capital, marchers held up pictures of Sheikh Qassim, who is the spiritual leader of Bahrain’s dissolved opposition bloc – the al-Wefaq National Islamic Society.
They also carried banners calling for the downfall of King Hamad, and condemned the Saudi regime for providing military support to Manama in its heavy-handed crackdown on opposition activists.
Earlier in the day, Bahrain’s Fourth High Criminal Court adjourned the trial of the 77-year-old Sheikh Qassim until May 7.
Bahraini authorities stripped the cleric of his citizenship on June 20, 2016. They later dissolved the Islamic Enlightenment Institution, founded by him, in addition to the opposition al-Risala Islamic Association.
The Manama regime has pressed charges of "illegal fund collections, money laundering and helping terrorism” against Sheikh Qassim, who has strongly denied them.
More activists end up behind bars
Meanwhile, the Bahrain Center for Human Rights says regime forces have detained at least 32 pro-democracy activists over the past week as the Al Khalifah regime presses ahead with its heavy-handed crackdown on political dissidents and rights activists in the tiny Persian Gulf kingdom.
The center said the detentions took place between March 6 and 12, and there were five, Presstv reported.
The report added that police forces used tear gas and pellet guns in 28 areas during the mentioned period to suppress protest rallies.
Anti-regime protesters have held demonstrations in Bahrain on an almost daily basis ever since a popular uprising began in the kingdom on February 14, 2011.
They are demanding that the Al Khalifah dynasty relinquish power and a just system representing all Bahrainis be established.
On March 14, 2011, troops from Saudi Arabia and the United Arab Emirates were deployed to Bahrain to assist the Manama government in its crackdown on peaceful protesters.
Scores of people have lost their lives and hundreds of others sustained injuries or been arrested.