Several aid trucks have made their way into four Syrian villages, delivering relief supplies to tens of thousands of people there, the International Committee of the Red Cross (ICRC) says. 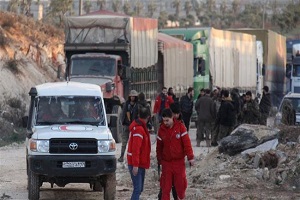 We are entering #Madaya, #Zabadani, #Foaa & #Kafrya with @SYRedCrescent & @UN delivering much-needed food & medical items,” the ICRC announced in a tweet on Tuesday.
The aid body also said convoys of trucks were carrying medical and food supplies to residents of Foua and Kafraya villages in Idlib Province as well as Madaya and Zabadani, two villages controlled by government forces in the suburbs of the capital, Damascus.
The areas are home to 60,000 civilians, according to the UN.
On Tuesday, the Syrian Central Military Media released a video showing a convoy of SUVs from the ICRC and the Syrian Arab Red Crescent escorting two aid trucks into Madaya.
Kevin Kennedy, UN regional humanitarian coordinator for the Syrian crisis, said this is the first such aid deliveries to the villages since last November.
Elsewhere in southwestern Dara’a Province, local officials said a convoy consisting of 35 trucks and carrying 275 tons of aid supplies provided by the ICRC were dispatched to a number of towns.
The developments come amid a ceasefire holding across Syria since last December.
The truce agreement was reached between Damascus and militant groups after government troops managed to liberate the eastern sector of flashpoint Aleppo City from militant groups following four years of counterterrorism operations.
Water flows into Aleppo veins
Also on Tuesday, the official SANA news agency reported that water flow had been restored to the Suleiman al-Halabi pumping station in Aleppo.
Aleppo Governor Hussein Diab said the area had been completely deprived of water for more than two months, praising the sacrifices of army forces in securing the city’s water resources.
Last week, the Syrian army captured the al-Khafsa area east of Aleppo, where treatment and pumping plants provide the city with water. The army and allied forces have made rapid gains against Daesh in the Aleppo countryside.
Meanwhile, Syria’s Permanent Representative to the UN in Geneva Hussam Eddin Ala rejected as "distorted” and "biased” a report by the International Commission of Inquiry to 34th Session of the UN Human Rights Council on the situation of Syria and Aleppo.
The report said the airstrikes against militants in eastern Aleppo before its liberation destroyed "all of the essentials of civilian life.”
Reacting to the claims, Ala told the session that the report was based on "contradicted and inaccurate information and reveals that those who wrote it know nothing about the geography or the reality of what is taking place on the ground in Syria,” SANA reported.
He said "the Syrian government has always been committed to the principles of the international law and...its obligations in terms of the war on terrorism.”
The Russian delegation at the session also slammed the report, which it said was aimed at distorting the facts.
It also said the independent commission’s report was first made public on March 1, when a round of UN-led peace talks was underway in Geneva.
Efforts were needed to create a positive atmosphere for a dialog, but the authors of the report "chose a different path,” the delegation added.
source: Press TV
Share to
Related News
25 killed in Damascus court house bombing
Syria talks enter 2nd day in Kazakh capital
Battle for Mosul is in last stage, Iraqi PM Abadi says
Syria talks officially kick off in Astana
Tags
aid ، convoys ، syria ، village
Your Comment