Russia summons Israeli envoy in Moscow over airstrikes in Syria

TEHRAN, March 18, YJC - Russia has summoned the Israeli ambassador to Moscow for clarification after Israeli warplanes violated the Syrian airspace and conducted a number of airstrikes on the Arab country’s territory. 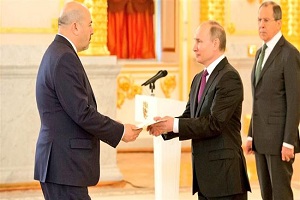 TEHRAN, Young Journalists Club (YJC) -Israeli media said Gary Koren was summoned by the Russian Foreign Ministry on Friday, a day after the Israeli envoy presented his credentials to Russian President Vladimir Putin.
Earlier on Friday, the Syrian army announced in a statement that Israeli fighter jets "penetrated” Syrian airspace via Lebanese territory and "hit a military target on the way to Palmyra” overnight. The statement added that the army's air defense shot down one of the aircraft and hit another.
Israel has carried out air raids against Syrian-based targets on many occasions, but it rarely acknowledges the attacks. On Friday, however, the Israeli military acknowledged that its jets bombed several targets in Syria.
In a statement to justify the provocative operation, Israeli Prime Minister Benjamin Netanyahu claimed that the Israeli military had targeted a convoy of the Lebanese resistance movement, Hezbollah, in Syria.
"When we identify attempts to transfer advanced weapons to Hezbollah — when we have the intel and the operational capability — we act to prevent it. That’s how we’ve acted and how we will continue to act… and everyone needs to take this into account,” Netanyahu said on Friday.
The resistance movement, whose fighters have fended off several Daesh attacks inside Lebanon, accuses Israel of supporting Takfiri terrorists operating in the Middle East. Hezbollah has also been providing assistance to Syrian army forces in their fight against Daesh and other foreign-backed terrorist groups in Syria.
The Syrian army added in the statement that Israel’s aerial assaults were in fact aimed at Syrian army positions to weaken Damascus against the Daesh Takfiri terrorist group in the region.
The Israeli raids were "a desperate attempt to raise their (Daesh terrorists') deteriorating morale and divert attention from the victories which the Syrian Arab Army is making in the face of the terrorist organizations,” it said.
Security boosted in Golan Heights
Following the Israeli airstrikes, Damascus reportedly boosted its security presence in the southwestern Quneitra province, which includes parts of the Golan Heights region.
Tel Aviv and Damascus are technically at war due to Israel's continued occupation of Syria's Golan Heights since 1967. The Israeli regime has also been supporting the militants fighting against the Syrian government.
Moscow launched its campaign against Daesh and other terror outfits in Syria in September 2015 at the Damascus government’s request. Russia's airstrikes have helped the Syrian forces advance against foreign-backed militants operating in the Arab country since 2011.
Source:Press TV
Share to
Related News
Israeli warplanes attack Syrian army positions in Golan Heights
US attack on Syria significantly damaged US-Russia ties: Putin
Daesh claims responsibility for British Parliament attack
Brussels falls silent a year after fatal Daesh attacks
Tags
russia ، israeil ، moscow
Your Comment