TEHRAN, March 22, YJC-Cross-border tensions are rising between Kurdish militias in Syria and Turkey's military after a Turkish soldier was fatally shot from a Kurdish-controlled area in northwestern Syria. 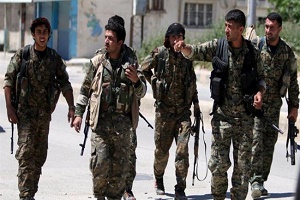 TEHRAN, Young Journalists Club (YJC) -On Wednesday, the Turkish army said the soldier had been shot to death in Hatay Province by a sniper on the Syrian side of the border.
Shortly after the incident, Turkish forces returned fire and shelled Syrian villages in the predominantly-Kurdish border region of Afrin, said the US-backed Kurdish People’s Protection Units (YPG), which is viewed as a terrorist group by Turkey.
According to the YPG, at least 10 civilians were wounded in the Turkish assault. The group has threatened to take reciprocal action.
"The Turkish army shelling is continuing,” YPG spokesman Redur Xelil told Reuters, adding, "Any response by our forces in this region comes as self defense.”
Ankara considers the Kurdish forces as an extension of the outlawed Kurdistan Workers’ Party (PKK), which has long been fighting for autonomy on Turkish soil.
The YPG makes up the bulk of the so-called Syrian Democratic Forces (SDF), a US-backed coalition of fighters who have seized swathes of territory from Daesh terrorists in northern Syria.
Nearly two-thirds of the 30,000 SDF militants belong to the YPG. The US support for the SDF has enraged Turkey.
The militia has been playing a major role in liberating Raqqah, the self-proclaimed headquarters of Daesh that fell to the terrorists in March 2013.
Raqqah push
In another development, Syrian Kurdish militias have given assurances that they will not enter the northern Syrian city of Raqqah as part of an upcoming operation to drive out Daesh terrorists from their main stronghold in the Arab state.
Rodi Othman, director of the Syrian Kurds’ representative office in Russia, said militants from the Kurdish People’s Protection Units (YPG) will only engage Daesh terrorists in the vicinity of Raqqah, without entering the city, located near the Turkish border, the London-based Asharq al-Awsat newspaper reported.
YPG militants, he said, will assist local tribal forces in their combat against Daesh terrorists at the outer boundaries of the city, adding that currently around 1,000 members of al-Shaitat Tribe are being trained in preparation for the liberation offensive, which is expected to start next month.
According to the official, no strategy plan has so far been drawn up for the upcoming operation, which, he said, would be similar to the battle underway against Daesh in Mosul in neighboring Iraq.
Othman further said the Kurdish militias are part of the Syrian nation, rather than an independent entity fighting to gain more Syrian territory.
He added that YPG militias are focusing on defeating Daesh and helping the Syrian people recapture their land from the Takfiri terror group on their own.
Othman further stated that the US military will not directly participate in the YPG combat operations, but will provide the fighters with military advice and coordinate airstrikes against the terrorists.
YPG commander Sipan Hemo told Reuters last week that the operation to storm Raqqah was due to start in early April, and that YPG would make up a quarter of the force, comprising allied Arab militants, that would fight to take back the city.
Turkey has deployed forces to northern Syria under the pretext of fighting Daesh, a move slammed by the central government as a violation of its sovereignty.
The Syrian army, backed by Russian airpower, is also engaged in separate battles against Daesh in the area.
Fatal US raids
Meanwhile, the so-called Syrian Observatory for Human Rights said Wednesday that at least 33 people lost their lives when US-led warplanes struck a school hosting displaced families south of the Daesh-held town of al-Mansoura in Raqqah Province a day earlier.
"They’re still pulling bodies out of the rubble until now. Only two people were pulled out alive,” said Observatory head Rami Abdel Rahman.
The US-led coalition has been conducting airstrikes against what is purported to be Daesh positions inside Syria since September 2014 without any authorization from the Damascus government or a UN mandate.
The coalition has repeatedly been accused of targeting and killing civilians. It has also been largely incapable of fulfilling its declared goal of destroying Daesh.
Source: Press TV
Share to
Related News
Turkish PM: Turkey’s Euphrates Shield operation in Syria complete
Russia denies reports of building military base with Syrian Kurds
Syrian army says downs Israeli drone near Golan
We are ready to discuss anything for peace in Syria: President Assad
Tags
syrian ، turkish ، military
Your Comment