TEHRAN, March 23, YJC- At least five people were killed and 40 others were injured outside the UK Parliament in London after an assailant plowed a car into pedestrians and stabbed a police officer, an incident that Metropolitan Police declared a terrorist incident. 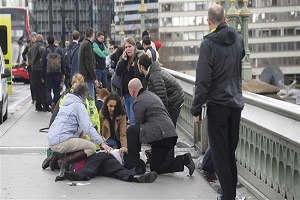 TEHRAN, Young Journalists Club (YJC) -One police officer and two pedestrians were among those killed during Wednesday's attack on Westminster Bridge near the House of Parliament, said Scotland Yard's top anti-terror officer Mark Rowley.
Rowley added that three police officers were among those injured, two of whom were in serious condition.
Britain's Press Association reported that a car barreled into pedestrians along the sidewalk of Westminster Bridge, causing multiple "catastrophic injuries."
Police said they assumed the assailant had been "inspired by international terrorism.”
Driving a large SUV, the assailant slammed into pedestrians on Westminster Bridge near Parliament, killing two people and injuring dozens, before crashing into a fence.
After the crash, the driver left the vehicle and approached Parliament, where he stabbed an armed police officer to death and was fatally shot by the police.
It appeared to be the most serious such assault in London since the deadly subway bombings in 2005.
No group or individual has so far assumed responsibility for the incident.
The Metropolitan Police said law enforcement personnel were called to the scene at around 2:40 pm, local time.
Police have arrested seven people in association with the attack and were investigating their possible ties to the assailant, who was identified as a reported Daesh sympathizer.
Daesh supporters on social media celebrated the deadly attack, with one user warning that "our battle on your land is only just beginning.”
The House of Commons session was suspended and members of parliament who were in the chamber were told to remain there.
UK Prime Minister Theresa May was rushed into a vehicle and spirited back to her office at 10 Downing Street.
She held a meeting of the government’s emergency committee and issued a statement on Wednesday night from her official residence condemning "the sick and depraved terrorist attack on the streets of our Capital this afternoon.”
May also said that "the full details of exactly what happened are still emerging,” but she confirmed that the attack had been carried out by a lone male assailant.
US President Donald Trump offered his condolences to May over the deadly attack.
The president further pledged "the full cooperation and support" of the US government "in responding to the attack and bringing those responsible to justice,” according to the White House.
The Westminster incident took place on the first anniversary of attacks in the Belgian capital Brussels that left over 30 people dead and more than 300 others injured.
Leader of the UK opposition Labour Party Jeremy Corbyn slammed the terror attack on Wednesay, promising the deepest possible inquiry into the incident.
Corbyn said everybody, including those inside the parliament and outside, must be kept safe. He added that the attack was a raid on normal and completely innocent people.
The London mayor has also commented the assault, saying Londoners won’t be cowed by the terrorists. Sadiq Khan said the reason behind the attack was the terrorists’ intolerance of London’s democracy, civil liberties and human rights.
He urged all Londoners and possible visitors to the city not to be alarmed by the attack, noting that London will remain one of the safest cities in the world.
Source:Press TV
Share to
Related News
Daesh claims responsibility for British Parliament attack
UK tanks arrive in Estonia, joining NATO troops to deter ‘Russian aggression’
Four people killed, at least 20 injured in attacks outside UK Parliament
Over half of people in UK unaware of Saudi war against Yemen: Poll
Dutch PM’s party leads elections: Exit polls
Tags
people ، UK ، terrorism
Your Comment