TEHRAN, March 29, YJC -Arab League heads of state are set to meet for an annual summit in Jordan to address a range of issues, particularly regional conflicts, as the prospect of a breakthrough seems far off. 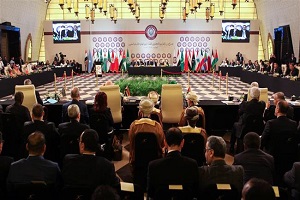 TEHRAN, Young Journalists Club (YJC) -The Wednesday meeting is to be held in the northwestern Jordan city of Sweimeh, with 22 Arab League leaders, including Saudi King Salman bin Abdulaziz Al Saud, in attendance.
UN Secretary-General Antonio Guterres and the world body’s Syria envoy Staffan de Mistura will also be among the guests.
Most notably, the event is slated to address the situations in Syria, Yemen and Palestine.
In the run-up to the summit, Arab League foreign ministers held preparatory meetings in Jordan.
On Monday, Arab League chief Ahmed Abul Gheit called on Arab leaders to play "a more active role” in finding a solution to the violence in Syria, describing it as "the worst crisis in the region’s recent history.”
Guterres also urged the Arab authorities on Tuesday to stand united in addressing the warfare.
"Arab unity is a very important element in order to allow this region to be stabilized and for... the Syrian refugees to find again a future that corresponds to their aspirations,” he said.
Read more:
UN urges Arabs to unite to tackle Syria crisis
Arab League leaders remain deeply divided over the role of Syrian President Bashar al-Assad.
Recently, Iraq, Lebanon, Jordan and Algeria have called for the return of Syria to the pan-Arab regional bloc, but their attempts have reportedly been rejected by Persian Gulf Arab countries, led by Saudi Arabia.
A number of Arab League members, especially Saudi Arabia, have been accused of funneling cash and arms to anti-Damascus militants since 2011. Damascus also accuses some of the states in the bloc hindering efforts to reach a political solution to the crisis.
Among other topics on the agenda is the crisis in Yemen. Saudi Arabia and its allies, most notably the United Arab Emirates, have been bombing the misery-riddled nation since 2015 in support of its Riyadh-allied former government. The warfare has killed thousands of civilians.
The summit is also expected to release a statement against US President Donald Trump’s plans to move Washington’s embassy in Israel from Tel Aviv to Jerusalem al-Quds and consider alternatives to a Palestinian state.
Arab leaders have warned that the move would set an exceptionally dangerous and irreversible precedence by tipping the situation in favor of Israel.
Source:Press TV
Share to
Related News
Morocco recalls envoy over Algeria FM's drug accusation
UN ‘extremely concerned’ over potential attack on Yemen’s Hudaydah
Syria, militants reach deal to evacuate 4 towns
Arab League chiefs due in Jordan for annual summit amid low expectations
UN urges Iran, Russia, Turkey to resume Syria talks in Astana
Bahrain sentences three activists to death, slaps life terms on four
Tags
arab ، jordan ، low
Your Comment