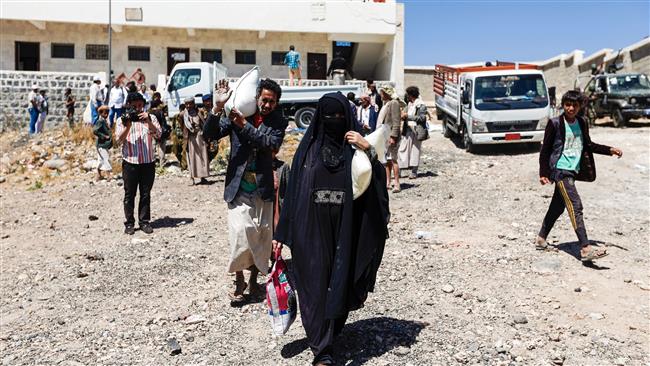 TEHRAN, Young Journalists Club (YJC) - According to a report by the Food Security Information Network (FSIN) on Friday, there is an increasing risk of famine in some areas across the world.
"There is a high risk of famine in some areas of north-eastern Nigeria, Somalia, South Sudan and Yemen because of armed conflict, drought and macro-economic collapse," the FSIN said.
FSIN, which is co-sponsored by the United Nations food agency, the World Food Programme and the International Food Policy Research Institute, said there is a growing demand for humanitarian aid.
On the second year of the deadly Saudi offensive on Yemen, the UN International Children’s Emergency Fund (UNICEF) reported on Monday that over 17 million people, which equals to 65 percent of all Yemeni households, are food insecure, meaning that they cannot afford feeding themselves and their children adequately.
Nearly 80 percent of Yemeni families are in debt or are borrowing money just to feed their kids, it added.
"The poorest country in the Middle East, Yemen is now the largest food security emergency in the world,” the report warned, estimating that at least 7.3 million Yemenis need emergency food assistance to survive.
The FSIN further warned that 108 million people reportedly faced crisis level food insecurity or worse in 2016, a steep rise from the total of almost 80 million last year.
The network deploys a five-phase scale with the first and second levels labeled as none and stressed, respectively, while the third level is classified as crisis, fourth as emergency and fifth as famine/catastrophe.
"In 2017, widespread food insecurity is likely to persist in Iraq, Syria (including among refugees in neighboring countries), Malawi and Zimbabwe," the FSIN’s report said.
The Food and Agriculture Organization of the United Nations (FAO) warned on Monday that ongoing conflicts in the Middle East and North Africa had sharply deteriorated food security and reduced nutrition levels, leaving approximately 30 million people unsure of their next meal.
"The region is facing unprecedented challenges to its food security due to multiple risks arising from conflicts, water scarcity and climate change,” FAO Assistant Director-General and Regional Representative for the Near East and North Africa Abdessalam Ould Ahmed said.
He added that regional countries need to implement long-term and comprehensive sustainable water management in order to attain the Sustainable Development Goal of ending hunger by 2030, Presstv reported.