TEHRAN, April 4, YJC -Iran has offered its condolences to the families of the victims of a deadly blast in a metro station in Russia's Saint Petersburg, stressing that killing innocent people is not a way to reach political goals. 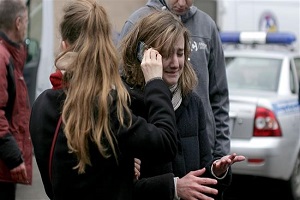 TEHRAN, Young Journalists Club (YJC)-"Causing insecurity and killing innocent people is the most humiliating path to reaching political goals,” said Iranian Foreign Ministry Spokesman Bahram Qassemi on Monday.
Earlier in the day, at least 11 people were killed and dozens more were wounded as an explosion ripped through a subway train traveling between St. Petersburg’s Sennaya Ploshad and Technological Institute stations. The Kremlin has stated that the incident has "all the hallmarks of an attack."
Following the blast, the city’s metro system was closed down as police found and defused another explosive device in another station.
Read More:
Blast hits St. Petersburg metro, casualties reported
Russia's Investigative Committee has announced that it is dealing with the incident as an "act of terror" but has said that it is not ruling out other possible causes of the explosion.
Condemning the attack, Qassemi reiterated Iran’s calls to form a serious international coalition for battling terrorism.
"We believe that the only way to stop these terrible atrocities is to cut them off by the roots; the only way to do this is through serious will of all international governments and organizations,” he added.
Hezbollah condemns attack
Separately, the Lebanese resistance movement of Hezbollah also condemned the terrorist explosion in Saint Petersburg. In a Monday statement, Hezbollah said the attack was further reason for world countries to unite in their efforts to confront the terrorists and their financial and ideological sources.
It said the attack would not dent Russia’s determination to fight terror.
United Nations slams deadly Russia blast
Meanwhile, UN Secretary General Antonio Guterres has condemned the attacks, stressing that those behind it must be held accountable.
"The secretary general condemns today's bombing in the St. Petersburg metro," said the UN chief’s spokesman Stephane Dujarric.
"He extends his deepest sympathy and condolences to the families of the victims and to the government and the people of the Russian Federation…Those responsible for this appalling act must be held accountable," he added. The UN Security Council also slammed the bombing as a "barbaric and cowardly terrorist attack."
Trump calls blast a ‘terrible thing’
US President Donald Trump also slammed the attack while attending an event at the White House. "Terrible. Terrible thing. Happening all over the world. Absolutely, a terrible thing, " he said.
According to the Kremlin, Trump also had a telephone conversation with Russian President Vladimir Putin to offer his condolences.
The US president also conveyed his support for the people of Russia, said a statement released by the Kremlin. It added that both leaders had voiced their joint view that "terrorism is an evil that must be fought jointly."
White House press secretary Sean Spicer also censured the attack, and offered condolences to the families of the victims.
"Attacks like these on ordinary citizens going about their lives remind us that the world must work as one to combat violence in all forms," said Spicer. "The United States is prepared to offer assistance to Russia and may require investigating this crime."
The acting US State Department spokesperson, Mark Toner, also condemned the "reprehensible attack on passengers of the St. Petersburg metro system.”
"We extend our deepest condolences to the loved ones of those who were killed, and our thoughts and prayers are with those injured in the attack and with the Russian people," he said.
Washington’s UN Ambassador Nikki Haley also stated that pictures showing the aftermath of the attack were "heartbreaking." "You can be sure the United States will stand with Russia on defeating these extremists who continue to senselessly harm innocent people," she said in a statement.
Extremists linked to bombing attack
According to the Interfax news agency, a police official said that the assailant had links to outlawed extremist groups.
He noted that the suspect was probably a 23-year-old man with central Asian heritage, but final conclusions would be made after DNA tests are carried out on the remains at the site.
A man who was earlier thought to have a role in the incident based on security camera footage has presented himself to the police claiming his innocence.
Source:Press TV
تعداد بازدید : 8
Code
Download
Main Quality
Share to
Related News
US attack on Syria significantly damaged US-Russia ties: Putin
Iran calls for joint int’l counter-terrorism efforts after Saint Petersburg metro attack
Iran slams raising Kurdish flags in Iraq’s Kirkuk
Tehran to host Astana experts meeting mid April
Tags
iran ، US ، UN ، russia
Your Comment