TEHRAN, April 5, YJC - The Syrian ambassador to Russia has accused Turkey of seeking to establish a city near the northern Syrian city of al-Bab, citing Turkish troops’ presence and occupation of the area. 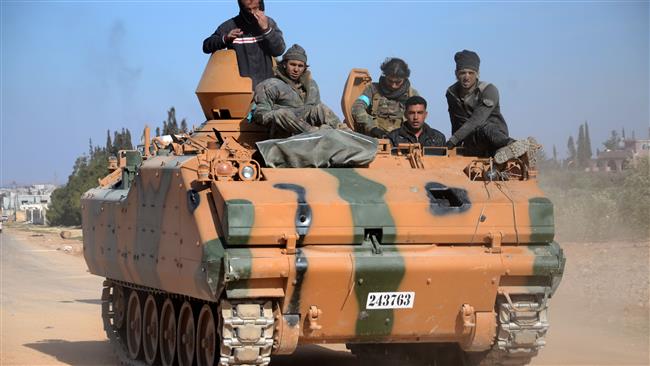 TEHRAN, Young Journalists Club (YJC) - Riad Haddad told Russia’s Sputnik news agency on Wednesday that the situation on the ground contradicts Turkey's claim about the end of its military campaign on Syrian soil.
"In practice, the Turkish side has not withdrawn its troops, which are currently in the north of the city of al-Bab, and are trying, with the help of factions that are allies of Turkey, to build a city there. I mean those terrorist groups which are located in the area, and thus they violate the territorial sovereignty of the Syrian Arab Republic," Haddad said.
Turkey launched its incursion into Syria on August 24, 2016, in an alleged bid to push Daesh terrorists from the border with Syria and stop the advance of Kurdish forces.
Damascus condemned the campaign as an act of aggression.
In February, Turkey announced that it had seized al-Bab and referred to the Syrian cities of Manbij and Raqqah as its next targets.
On March 29, however, Turkish Prime Minister Binali Yildirim said the country's 'Operation Euphrates Shield' was complete, noting that any further military measures in Syria would by conducted under a different name.
"When we hear Turkey's claims that it is stopping its actions in Syria it is actually just one element of the information war. Furthermore, it is a blatant violation of the UN Charter, international law and all UN Security Council resolutions on Syria and on combating terrorism,” Haddad said.
Elsewhere in his remarks, the Syrian envoy warned that Turkey had begun the process of seizing new lands in Idlib province, where it had also set up two camps to train anti-Damascus militants.
Turkey-backed militants advance towards the Syrian city of al-Bab on February 20, 2017.
"This is not only an outrageous aggression against the sovereignty of the country, but against the people of Syria," he added, predicating that the Turkish forces were preparing for the construction of a wall to separate the lands they had occupied from the Syrian territory, Presstv reported.
Turkey has unilaterally moved the border with Syria deeper into Syrian soil near the Afrin River, Haddad further pointed out.
"Turkey used the drying up of the Afrin River to the southwest of the town of Jindires and moved the barbed wire that marks the border deeper into our territory, as if it were Turkish land already. Therefore, Syrian soil is being captured," he added.