Regime change in Syria a priority of Trump administration: Haley

TEHRAN, April 9, YJC -The US ambassador to the United Nations, Nikki Haley, says the ouster of Syrian President Bashar al-Assad is one of the priorities of the Trump administration. 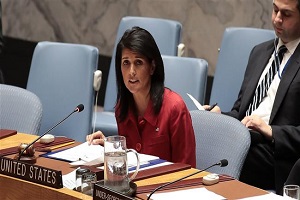 TEHRAN, Young Journalists Club (YJC)- "There’s not any sort of option where a political solution is going to happen with Assad at the head of the regime,” Haley said in an interview with CNN, which will air in full on Sunday.
"If you look at his actions, if you look at the situation, it’s going to be hard to see a government that’s peaceful and stable with Assad,” she stressed. "Regime change is something that we think is going to happen."
The ambassador, however, emphasized that defeating the Daesh (ISIL) terror group was still a top policy goal in Syria.
The comments represented a departure from what Haley had said before the US military launched a massive missile strike against a Syrian airbase in the early hours of Friday.
President Donald Trump said the operation was in response to a suspected chemical attack this week, which Washington has blamed on the Assad government.

"You pick and choose your battles and when we're looking at this, it's about changing up priorities and our priority is no longer to sit there and focus on getting Assad out," Haley had told reporters on March 30.

Syria and Russia said the chemical explosion in Idlib, which left more than 80 people dead, was caused by an airstrike on a militant-controlled depot.

The missile strikes on al-Shayrat airfield in Homs showed the lack of any coherent foreign policy by the Trump administration, according to international relations experts.

That has also been evident in conflicting statements by administration officials.

Secretary of State Rex Tillerson took a more measured tone with regard to the Syrian government on Saturday, saying the administration’s first priority was the defeat of Daesh.

Once the threat of Daesh was dealt with, "I think we can turn our attention directly to stabilizing the situation in Syria,” Tillerson said in an interview with CBS that will air in full on Sunday.

The top diplomat said Washington hopes it can help bring parties together to negotiate a political solution to the conflict.

"If we can achieve ceasefires in zones of stabilization in Syria, then I believe – we hope we will have the conditions to begin a useful political process,” Tillerson said.

Tillerson is scheduled to arrive in Russia on Tuesday for two days of talks. Russian Foreign Ministry spokeswoman Maria Zakharova said that Moscow expected "explanations" over the airbase attack.

Members of Congress have demanded that the Trump administration develop a broader strategy for Syria and consult with lawmakers on any military action.

US reduces airstrikes after missile attack

The United States has been conducting airstrikes against purported Daesh targets inside Syria since September 2014 without any authorization from Damascus or a UN mandate.

The US-led coalition, which has largely failed to fulfill its declared goal of defeating Daesh, has repeatedly been accused of targeting Syria’s infrastructure and killing civilians.

Following the airbase attack, the US has greatly reduced the airstrikes as commanders assess whether the Syrian government or Russia plan to respond, the New York Times reported, citing US officials.

The Pentagon for now is flying patrol missions over Syria with F-22 jets, officials said on condition of anonymity.

They said if the US military can determine that Syria and Russia will not follow their sharp criticism of the missile strikes with military action, it could quickly increase the pace of the air campaign.