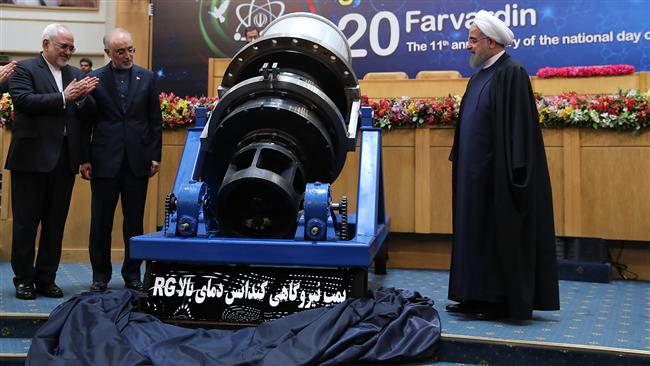 TEHRAN, Young Journalists Club (YJC) - The Iranian chief executive lifted the curtain off the accomplishments made by the Atomic Energy Organization of Iran, namely a stone centrifuge, and high-temperature condensate pump.
The former product is used to analyze samples gleaned from oil fields in order to estimate the general geological conditions governing the terrains.
The latter product is used at Bushehr Nuclear Power Plant in southern Iran. It has been manufactured by domestic experts for the first time at a fourth of the international price.
Separately, the day witnessed the inauguration of three nuclear centers:
A center for the production and development of nuclear medicine in the north-central Alborz Province; another designed to host industrial irradiation in the northwestern Qazvin Province; and one for the crushing and concentration of uranium ore in the east-central Yazd Province.
Later in the day, Rouhani delivered an address to commemorate the occasion, hailing that the country had led as many as 42 nuclear projects towards fruition over the past year on the solar calendar, which ended on March 20, 2017.
He said nuclear technology is "a necessity for the country,” adding Iran had opted for "the straightest and least costly direction to stabilize and continue to exercise its nuclear rights.”
He was referring to the diplomatic efforts by the Iranian officials, which led to the 2015 conclusion of a landmark nuclear accord with the P5+1 group of counties, namely the US, Britain, France, Russia, and China plus Germany.
"Our artists of diplomacy drove home the slogan of ‘nuclear energy is our obvious right’ on the international arena,” he added.
Share to
Related News
AEOI dismisses MKO allegations about undeclared nuclear site
Tags
Rouhani ، Iran ، nuclera
Your Comment