TEHRAN, April 11, YJC -Police in Venezuela have clashed with protesters in the capital Caracas on the fifth day of opposition-backed demonstrations against the government of President Nicolas Maduro. 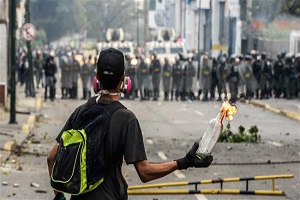 TEHRAN, Young Journalists Club (YJC) -The clashes erupted on Monday as protesters threw stones and Molotov cocktails, prompting police to fire water cannon, tear gas and rubber bullets in return.
"This is a battle of resistance. We will see who gets tired first: us of fighting, or them of repressing,” said the deputy speaker of the opposition-majority congress, Freddy Guevara.
The country has been rocked by a string of violent protests sparked by the Supreme Court’s ruling to annul the legislature.
Venezuela’s Supreme Court had ruled that the National Assembly was in "contempt” and annulled its legislative powers. However, it reversed its ruling on April 1 after Maduro asked the judicial body to review the decision.
The protests intensified on Saturday after the government on Friday barred opposition leader Henrique Capriles from holding political office for 15 years over "administrative irregularities” during his current term as the governor of the northern state of Miranda.
On Monday, Maduro stressed in a meeting with leaders in Cuba that the US was to blame for the political crisis gripping his country.
"The order has been given from Washington that there must be no dialogue in Venezuela, to make our country explode and give way for a foreign intervention,” he said in a public address.
Maduro was in Havana for a meeting of foreign ministers of the Bolivarian Alliance for the Peoples of Our America, or ALBA.
Bolivia, Cuba, Ecuador, Nicaragua and several Caribbean countries issued a statement in his support, denouncing "aggression and manipulation” against Venezuela that they said "threaten its sovereignty, independence and stability.”
Rival protests planned in Venezuela
Meanwhile, the opposition in Venezuela is planning to stage mass anti-Maduro protests on April 19 in what Guevara called the "mother of all protest marches.”
The protesters demand elections among other things.
A counter-rally will be held on the same day by supporters of Maduro who announced that they would gather in central Caracas.
Tensions have been running high between the opposition and the government since the 2015 elections, when the opposition gained control of the parliament.
Public discontent with the government has been high as a result of the economic woes gripping the once-booming Latin American economy. Venezuela has the world’s largest oil reserves.
The opposition blames Maduro’s socialist government for the country’s economic troubles, while the leftist government blames the opposition forces for inciting political unrest.
Last year, the opposition launched an abortive attempt to force Maduro out of office by seeking to hold a recall referendum.
Source:Press TV
Share to
Related News
3 more people killed in Venezuela unrest
Government supporter ‘dies of injuries’ in Venezuela
At least four killed in protests against Maduro in Venezuela
Venezuela calls Peruvian leader 'coward' and 'dog'
Venezuela to limit US diplomats, require visas for Americans
Venezuela charges opposition leader sparking protests
Tags
police ، clash ، maduro
Your Comment