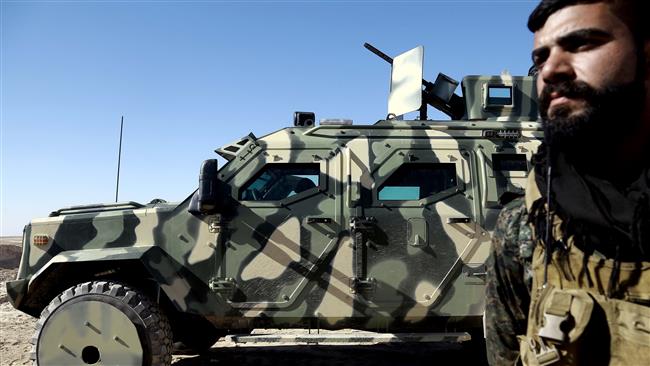 TEHRAN, Young Journalists Club (YJC) - US Central Command said Thursday that Tuesday's attack by US-led coalition aircraft killed 11 members of the so-called Syrian Democratic Forces (SDF).
Central Command said the aircraft were given the wrong coordinates by the SDF, for a strike intended to target Daesh (ISIL) terrorists south of their Tabqa stronghold.
The strike hit an SDF position instead, killing 18 fighters.
SDF is a US-backed coalition of fighters who have seized swathes of territory from Daesh (ISIL) terrorists in northern Syria.
The militia has been playing a major role in liberating Raqqah, the self-proclaimed headquarters of Daesh that fell to the terrorists in March 2013.
Several countries have participated in the American-led intervention in Syria to defeat Daesh. It is not clear which air force was behind the strike.
Separate reports coming out of Syria suggest that hundreds of people, including civilians, have lost their lives after an airstrike by the US-led coalition hit poison gas supplies belonging to Daesh terrorists.
The General Command of the Syrian Army and Armed Forces, in a statement released on Thursday, announced that the airstrike had taken place in the eastern village of Hatla, near the city of Dayr al-Zawr, at around 5:30 p.m. local time (1530 GMT) the previous day.
The statement, published by Syria’s official news agency, SANA, added that a cloud of thick white smoke covered the area after the strike, before it turned yellow. The assault also caused a fierce blaze, which continued until late in the evening on Wednesday.
Earlier on Thursday, Syrian President Bashar al-Assad said an alleged chemical attack last week in Idlib province that the US blames on his government was ‘100 per cent fabrication.’
Two US Navy destroyers fired 59 Tomahawk cruise missiles from the Mediterranean Sea at Syria’s al-Shayrat airfield early on Friday, In retaliation for a suspected chemical attack on April 4 that Washington insists was carried out by Syrian fighter jets operating from the base.
The Syrian government has strongly denied responsibility for the gas attack, and there is no evidence that it was behind the assault.
Russia maintains that the attack was a "false-flag” operation orchestrated in an attempt to criminalize Assad, Presstv reported.
During his presidential election campaign, US President Donald Trump had indicated that he would be less willing than some of his predecessors to conduct military operations against other countries.
Share to
Related News
Over 80% of Russians consider US attack on Syrian airfield as 'provocation'
Iran marking Army Day with parade
Iran: US in no position to talk about human rights
Tags
US ، strike ، Pentagon
Your Comment