Japan discusses how to evacuate citizens from South Korea

TEHRAN, April 14, YJC -Japan’s National Security Council discussed how to evacuate its nearly 60,000 citizens from South Korea in the event of a crisis over North Korea’s nuclear program, a government official said on Friday. 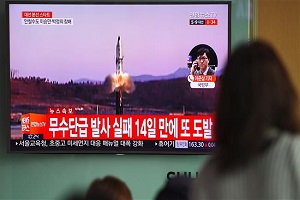 TEHRAN, Young Journalists Club (YJC) North Korea denounced the United States on Friday for bringing "huge nuclear strategic assets” to the Korean peninsula as a US aircraft carrier group headed for the region amid concerns the North may conduct a sixth nuclear test.
Besides commercial ships and planes, Japan would want to send military aircraft and ships to assist in the evacuation if the South Korean government agreed, the official, familiar with the discussion, said. He declined to be identified because of the sensitivity of the topic.
The NSC, in a meeting on Thursday, also discussed how to cope with a possible flood of North Korean refugees into Japan, among whom might be North Korean spies and agents, Japanese media reported.
Tension has risen since the US Navy fired 59 Tomahawk missiles at a Syrian airfield last week, raising concerns about US President Donald Trump's plans for North Korea, which has conducted missile and nuclear tests.
The United States has warned that its policy of "strategic patience” is over.
Japanese Chief Cabinet Secretary Yoshihide Suga told a news conference on Friday that the government was always collecting and analyzing information about North Korea's moves but refrained from commenting on details.
"At present, we are in close contact with the United States and South Korea and in addition to urging (the North) to refrain from provocative actions and observe relevant UN Security Council resolutions, we will take all necessary steps to protect our people's lives and assets,” Suga said.
Japan began working on plans to respond to a potential crisis on the Korean peninsula in February, after Prime Minister Shinzo Abe met Trump at a summit in the United States, Kyodo news agency said.
A Japanese ruling party lawmaker and a government source told Reuters this week that coping with possible North Korean refugees would be among the matters for which Japan had to prepare.
But they said there was concern that any sign of actual preparations for a possible crisis would boost public anxiety.
(Source: News agencies)
Share to
Related News
Japan’s Abe dissolves parliament ahead of snap polls
China denies any deployment of troops near North Korea
China's Xi urges peaceful resolution of North Korea tension in call with Trump
Japan plans to join US strike group headed for Korean Peninsula: Sources
Tags
japan ، citizens ، korea
Your Comment