TEHRAN, April 14, YJC - Iran, Russia and Syria have once again condemned a recent US cruise missile strike against a Syrian army base under the pretext of responding to an alleged gas attack in the town of Khan Shaykhun, calling for an impartial investigation into the reported incident. 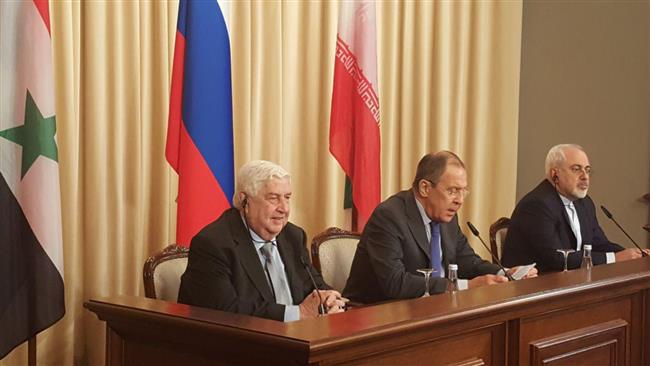 TEHRAN, Young Journalists Club (YJC) - Syrian Foreign Minister Walid al-Muallem, along with his Iranian and Russian counterparts Mohammad Javad Zarif and Sergei Lavrov, was speaking at a joint press conference in Moscow on Friday.
Muallem further slammed Washington for its hostile policies against the Syrian nation, stressing that Damascus wants an "impartial” and "swift” investigation into the alleged gas attack which killed over 80 people in Khan Shaykhun earlier this month.
The Westerners and the militants have accused the Damascus government of being behind the attack, without offering any proof to support the claims. The Syrian government has,however, rejected any role in such an assault against civilians.
Using the Idlib incident as a pretext, United States struck a Syrian army airfield in western Syria with 59 cruise missiles last Friday.
At the presser, the three top diplomats slammed the US missile attack as an act of aggression and stressed they have convergent and close cooperation in efforts to resolve the crisis in Syria.
"We have reiterated our position and were united in stating that the attack was an act of aggression, which blatantly violated the principles of international law and the UN Charter,” Lavrov said.
"We call on the US and its allies to respect Syria’s sovereignty and refrain from actions similar to what happened on April 7, and which have serious ramification not only for regional, but also global security,” he added.
The press conference came following closed-door negotiations between the three foreign ministers on the situation in Syria.
Meeting with Zarif and Muallem, Lavrov pledged continued Russian support for Damascus in fighting terrorism and restoring peace to Syria, RT reported.
"We insist on a thorough, objective and unbiased investigation of the circumstance of the use of chemical substances in Khan Shaykhun on April 4,” he said, adding that the investigating team must include inspectors chosen from nations from different parts of the world to ensure its objectivity.
Zarif, in turn, said "certain countries” have adopted a hyporticical approach in dealing with the issue of chemical arms, citing Iran’s history of suffering from chemical weapons attack by the US-backed regime of ex-Iraqi dictator, Saddam Hussein, in the 1980s war.
Declassified CIA files showed that the US was well aware that Saddam was using CWs against Iranians, but didn’t oppose it and even provided intelligence for such attacks.
The Iranian foreign minister is visiting Moscow at the invitation of his Russian opposite number.
Upon his arrival in Moscow earlier in the day, Zarif said the visit serves to enable some other bilateral coordination concerning President Hassan Rouhani’s late March visit to Russia.
The visit saw Iran and Russia issuing a joint statement outlining a roadmap for the future status of their bilateral relations and cooperation on the regional and international stage.
Zarif also down for talks with the Russian foreign minister to discuss closer Tehran-Moscow cooperation in regional and international issues as well as the fight against terrorism.
At the meeting, the top Iranian diplomat emphasized the need for a political settlement of the Syria crisis and end to foreign meddling in the affairs of the Arab country.
Zarif further called for investigations into a purported gas attack that killed over 80 people in the town of Khan Shaykhun in Syria’s Idlib Province, stressing that such an attack must be used as a pretext against the Syria.
Last October, the three top diplomats held similar talks in the Russian capital where they emphasized the need for unyielding fight against terrorism and working towards the resumption of UN-brokered Syria talks in Geneva, which started last year before breaking down.
In December 2016, Moscow also hosted a meeting of foreign and defense ministers of Russia, Iran and Turkey on the Syria crisis.
The Moscow talks resulted in more concerted cooperation against terrorists in Syria and laid the groundwork for Syria talks in the Kazakh capital of Astana.
Iran has been lending Syria military advisory support against the foreign-backed militancy, which has been plaguing the country since 2011. Russia has been backing up the fight with airstrikes since last September.
Share to
Related News
Russian Syrian envoy in Iran Thursday
Iran marking Army Day with parade
Tags
Iran ، Russia ، Syria ، attack ، Homs
Your Comment