TEHRAN, April 15, YJC - Hojjatoleslam Seyyed Ebrahim Raeisi, the current custodian of the Holy Shrine of Imam Reza (PBUH) in the northeastern Iranian city of Mashhad, throws his hat in the ring for the forthcoming presidential contest. 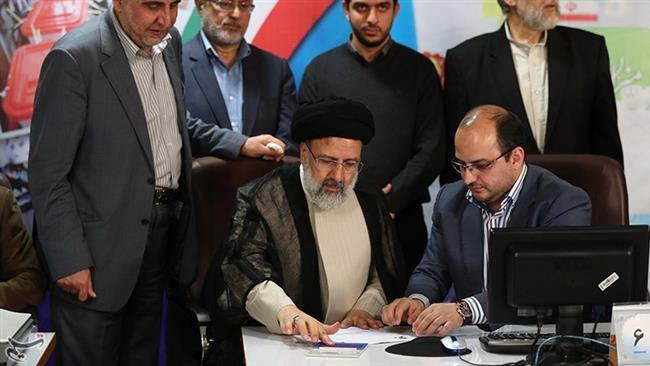 TEHRAN, Young Journalists Club (YJC) - Raeisi arrived at the Interior Ministry building on Friday and registered for the 12th presidential election, scheduled to be held on May 19.
He has served as Attorney General from 2014 to 2016, and Deputy Judiciary Chief from 2004 to 2014. He was also Prosecutor and Deputy Prosecutor of Tehran in 1980s and 1990s. Raeisi is also a member of the Assembly of Experts from South Khorasan Province, being elected for the first time in 2006 election.

On 6 April 2017, Raeisi officially announced his plans to run for the upcoming presidential election.

Earlier in April, the national assembly of the Popular Front of the Islamic Revolution Forces named their five final candidates for the May presidential poll through voting.

The five were elected from a total of ten candidates, who had been chosen in the first meeting of the assembly, which was held at the same venue on February 23.

'Votes will decide Iran's fate'
Addressing the media after registering for the presidential election, Raeisi said people’s vote forms the basis of the Islamic establishment in Iran.

Noting that good steps taken for the country’s progress, Raeisi said that the status quo in the country can be changed for the better and that national economy must be insulated from fluctuations in the global economy.

He added that he has chosen "labor and dignity” as the slogan of his administration if elected.

Raeisi said the Islamic Republic must have various forms of interaction with the entire world, including in the cultural and economic sector.

"We will continue with interaction with all countries but not the occupying Zionist regime (Israel) and of course such relations will be based on dignity,” Raeisi said.
(Source: Press TV)
Share to
Related News
Presidential candidate Raeisi stresses economic boom, settling unemployment
Leader warns against enemy attempts to mar Iran presidential vote
Tags
Raeisi ، Iran ، presidential election
Your Comment