TEHRAN, April 15, YJC -Pyongyang has showcased its submarine-launched ballistic missiles (SLBMs) for the first time during a massive military parade, with a senior North Korean official vowing due response to any attack against the East Asian nation. 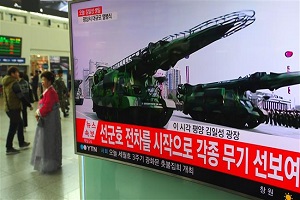 TEHRAN, Young Journalists Club (YJC) -On Saturday, state TV showed images of the Pukkuksong-2 SLBMs and several KN-08 and KN-14 missiles on trucks along with tanks and other heavy military hardware being paraded on Kim Il Sung Square in the capital, Pyongyang.
Leader Kim Jong-un oversaw the parade which was celebrating the 105th birthday of state founder Kim Il Sung, his grandfather. He also addressed thousands of soldiers and people taking part in the celebrations.
The event also paraded what appeared to be a new intercontinental ballistic missile (ICBM).
It is the first time North Korea publicly displays the ballistic missiles, which have a range of over 1,000 km (600 miles), at a military parade.
The parade comes as tensions have been simmering between North Korea and the US in recent weeks, raising fears of a potential military confrontation between the two sides. Washington has voiced concerns over  Pyongyang’s nuclear tests, but the North says such launches are an act as deterrence against a potential invasion by the US or South Korea.
Prior to the parade, Kim’s close aide Choe Ryong-hae also addressed the participants, voicing the country’s readiness to respond in kind to any attack by enemies.
"We’re prepared to respond to an all-out war with an all-out war and we are ready to hit back with nuclear attacks of our own style against any nuclear attacks,” Choe said.
Choe, who is believed to be the second-most powerful official in North Korea, further stated that the new US government under Donald Trump was "creating a war situation” on the Korean Peninsula by dispatching strategic military assets to the region.
Pyongyang also warned Washington on Saturday to end its "military hysteria” or face retaliation as a US aircraft carrier strike group headed towards the region.
"All the brigandish provocative moves of the US in the political, economic and military fields pursuant to its hostile policy toward the DPRK will thoroughly be foiled through the toughest counteraction of the army and people of the DPRK,” the KCNA state news agency said, citing a spokesman for the General Staff of the Korean People’s Army.
DPRK stands for the Democratic People’s Republic of Korea, the official name of the East Asian state.
"Our toughest counteraction against the US and its vassal forces will be taken in such a merciless manner as not to allow the aggressors to survive,” it added.
inflammatory rhetoric
The development comes days after the US dispatched what Trump referred to as an "armada” of warships in a show of force into waters off the Korean peninsula amid concerns that Pyongyang was preparing another round of nuclear or missile tests.
Fears have grown since the US Navy fired Tomahawk missiles at a Syrian airfield last week in a unilateral decision claiming ‘retaliation’ for an alleged chemical attack in the Arab country. The move triggered questions about Trump’s plans for North Korea, which has conducted several missile and nuclear tests.
Moreover, Washington has warned that a policy of "strategic patience” with North Korea is over as US Vice President Mike Pence travels to South Korea on Sunday on a 10-day tour of Asia.
This is while political analysts have played down Trump’s inflammatory rhetoric on different topics, including North Korea, saying he makes tough statements on an issue before understanding its complexity.
In an interview with Press TV, Jim Walsh, an analyst with Security Studies Program at Massachusetts Institute of Technology (MIT), said, "What we’re seeing on this issue (North Korea as we’ve seen on a variety of issues with Mr. Trump is an early statement that is pretty tough and then as he wades deeper into the issue he finds that it is more complex than he anticipated.”
On Friday, China issued a stern warning that a conflict over North Korea could break out "at any moment” after Pyongyang vowed a "merciless” response to any US military action.
Russia also urged all sides involved in the crisis in the Korean Peninsula to show "restraint,” warning of any "provocative steps.”
Source:Press TV
تعداد بازدید : 9
Code
Download
Main Quality
Share to
Related News
North Korea says don't 'mess with us' as U.S. plans next move
Yemenis kill 4 Saudi troops, attack military base
'Right time' to use huge bomb in Afghanistan: U.S. general
Conflict can break out on Korean Peninsula any moment: China
Syria’s territorial sovereignty must be respected: Algeria
Japan mulls returning North Korean citizens
Moscow holds meeting with Iran attend
Tags
north korea ، balistic ، us
Your Comment