TEHRAN, April 16, YJC -Iran has officially inaugurated several mega projects in its natural gas hub of South Pars – projects that can put the country in the lead over production from a giant field that it shares with Qatar. 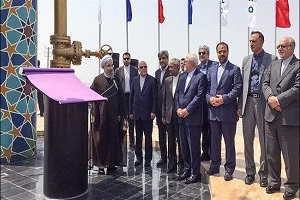 TEHRAN, Young Journalists Club (YJC) -The projects included South Pars Phases 17 and 18, Phase 19, as well as Phases 21 and 22. They were inaugurated by Iran’s President Hassan Rouhani.
The phases increased Iran’s total gas production by 150 million cubic meters per day (mcm/d) thus bringing the country’s overall gas output to as high as 540 mcm/d. The figure was an increase of above 100 percent from 250 mcm/d recorded in 2013 when Rouhani assumed office.
The inauguration of the phases also increased Iran’s production of condensate by 200,000 barrels per day. Other key products include ethane and liquefied petroleum gas (LPG) which respectively increased by 3 million tons per day (mt/d) with the inauguration of the phases.
Rouhani further inaugurated production of 35,000 barrels per day (bpd) of oil from an exceptional oil field which is located in South Pars gas hub – a field named South Pars Oil Layer.
Iran’s president described the development of the Oil Layer "a dream come true”.  He further expressed hope that production from the field would increase to as high as 60,000 bpd in the near future.
Other projects that were put on stream included four petrochemical projects that were developed by private companies in South Pars.
Iran’s media reported that the development of South Pars phases as well as the Oil Layer and the petrochemical projects that were inaugurated by Rouhani had taken an investment of $20 billion.
It is estimated that production from every two phases of South Pars would generate $3.5-$4 billion for Iran. Reports further said that the total investments in phases that were inaugurated today would be reimbursed within less than two years.
The Iranian president said the inauguration of the projects had marked a historic day for the country’s oil industry.
Rouhani also emphasized that the projects were manifestations of "resistance economy” that the country was strongly pursuing for years, specifically after sanctions were implemented against it since 2011.
"We saw how the Iranian nation stood against the plots and the sanctions devised by the enemies,” he said at the inauguration ceremony of the projects. Today, he said, we are witnessing the results of the resistance and patience of the Iranian nation.
South Pars – called the North Dome field in Qatar – is located in the Persian Gulf and is the world’s biggest largest gas field with estimated reserves of 51 trillion cubic meters of natural gas and some 50 billion barrels of condensate.  Experts believe that the field has more recoverable reserves than all other fields combined.
Iran has so far developed 12 phases in the field – phases 1, 2&3, 4&5, 6-8, 9&10, 15&16.  The remaining phases are 11, 12, 13, 14 and 22-24.
Source:Press TV
Share to
Related News
Fire extinguished at Iran’s South Pars gas field
Official: Iran’s output in South Pars equals with Qatar’s share
Govt. steeply raises cash handouts for Iranians
Iran Defense Ministry showcases achievements, including some making first appearances
Flooding, landslides kill 25 in northwest Iran
Tags
iran ، mega gas ، projects
Your Comment