TEHRAN, April 18, YJC - Zarif arrived in Tbilisi on Monday evening at the official invitation of the country’s foreign minister to hold talks about economic cooperation between Iran and Georgia. 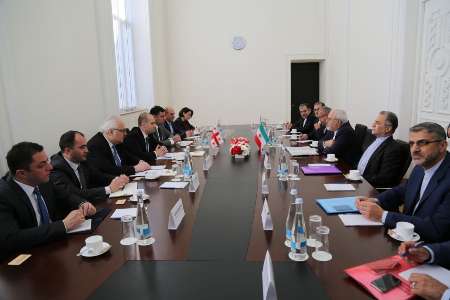 TEHRAN, Young Journalists Club (YJC)- Arrived in Tbilisi on Monday,Iranian FM Mohammad Javad Zarif visited Georgia’s Economy and Sustained Development Minister on Tuesday to hold talks about the increase of cooperation between Iran and Georgia. The visit was after Zarif’s meeting with his Georgian counterpart.

In this visit, the different areas of economic cooperation including business, transit, banking and financial affairs, education, and industry between the two countries were discussed.

Zarif said that creating the passageway connecting Persian Gulf to Black Sea provides an opportunity to bring the region’s country much closer to each other and decrease the costs of transporting goods.

Zarif’s trip to Georgia centers around the expansion of Iran’s regional cooperation. After Georgia, he will travel to Kyrgyzstan.

According to a statement released by the Georgian Ministry of Foreign Affairs late on Monday, Iran’s top diplomat will also attend an Iranian-Georgian business forum and visiting Georgia’s National Archive.