TEHRAN, April 22, YJC Russian Foreign Minister Sergei Lavrov says Moscow, Tehran, and Ankara are continuing cooperation on consolidating a nation-wide ceasefire in Syria, adding that the trio are working on joint mechanisms to punish those violating the truce. 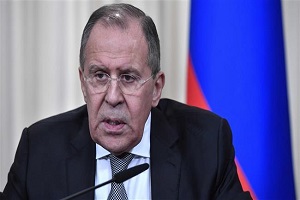 TTEHRAN, Young Journalists Club (YJC)-Lavrov made the remarks at a news conference following a meeting of the Council of Foreign Ministers of the Shanghai Cooperation Organization in the Kazakh capital, Astana, on Friday.
Facilitated by Russia, Iran, and Turkey, the ceasefire took effect between Syria’s warring parties last December.
The three guarantor states have also mediated three rounds of peace negotiations between the Syrian government and opposition groups in Astana since the beginning of 2017. The fourth round is scheduled for May 3 and 4.
]
Russia is using the Astana process to strengthen the ceasefire regime, Lavrov said, adding, "Together with Turkey and Iran, we are developing joint mechanisms, which will not only register the violations of ceasefire agreements, but will also be able to respond to these violations, exert pressure on the violators.”
The Astana talks helped kick-start a series of peace talks for Syria that had been going on under the auspices of the United Nations (UN) but that had stalled for almost a year.
A preparatory meeting of experts from Russia, Iran and Turkey was held in the Iranian capital, Tehran, on April 18 and 19.
Following the meeting, the Iranian Foreign Ministry said in a press communiqué that the experts had discussed draft documents including those pertaining to the ceasefire regime and its implementation as well as those regarding the exchange of detainees and abductees.
"A delegation of experts from the UN joined the trilateral meetings as observers, bringing in invaluable expertise and technical assistance,” it read, adding that all participants in the Tehran meeting had agreed to hold the next expert-level meeting on May 2, one day before the Astana talks.
The talks are aimed at bringing an end to the foreign-backed militancy in Syria, which began in March 2011.
The Syrian army has been conducting a major operation to rid the country of militant outfits. Iran and Russia are allied to the elected Syrian government, while Turkey supports armed anti-Damascus groups.
Syria’s In his Friday remarks, Lavrov blasted main opposition bloc, the High Negotiations Committee (HNC), for insisting on the overthrow of Syrian President Bashar al-Assad in defiance of the United Nations Security Council Resolution 2254.
The resolution, which was unanimously adopted in December 2015, endorses a roadmap for a peace process in Syria. The resolution says that the Syrian people are to decide their own future and underlines the need for parties to engage in formal negotiations on a political transition process "on an urgent basis.” It takes no specific position on Assad.
Lavrov further called on those who influence and finance the HNC to "review their policy of kowtowing to the opposition who persist in their destructive stand.” The HNC is commonly believed to be guided by Saudi Arabia.
Source:Press TV
Share to
Related News
Kazakh FM thanks Iran for role in Astana process
Iran, Russia condemn Israeli attack on Syria airport
Cancel meeting with NGOs or we won’t meet: Netanyahu to Gabriel
Russia backs Iran’s full membership in SCO
Russia warns US against 'unilateral action' on North Korea
US agreed not to repeat Syria strike: Lavrov
Russia vetoes Security Council resolution on Syria chemical attack
Putin says trust erodes under Trump, Moscow icily receives Tillerson
Tags
lavrov ، meeting ، council ، ministers ، coopration
Your Comment