TEHRAN, April 22, YJC - Executives of oil and gas companies from about 18 countries are attending an international conference on petrochemical industry in Tehran to explore Iran’s emerging role in global markets. 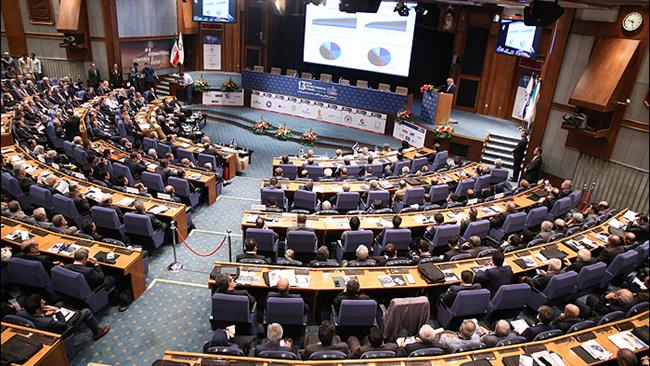 TEHRAN, Young Journalists Club (YJC) - The international Iran Petrochemical Forum (IPF) opened Saturday with the participation of industry experts, traders, petrochemical producers, refiners, shipping and logistics companies as well as technology solution providers and engineering companies.
France’s oil and gas company Total and Germany’s industrial gases group Linde are leading the pack of more than 70 companies which have their nose on the ground for business in Iran.
They are coming from as diverse countries as the UK, Italy, Denmark, Belgium, Switzerland, Singapore, Japan, Turkey, India, Romania, Bahrain and Lebanon.
Their participation at the two-day conference raised the prospects of new deals being signed for investment in Iran’s massive petrochemical sector which aims to attract some $55 billion in the next 10 years.
No match for feedstock
Minister of Petroleum Bijan Zangeneh told the conference that no country possesses as much feedstock for petrochemical development as Iran. "This claim is based on the realities and our known oil and gas reserves,” he said.
Iran's proven oil reserves of 157 billion barrels are the world’s third largest, while its gas reserves are the biggest. Taken together, the country owns the biggest hydrocarbon reserves in the world.
According to Managing Director of the National Petrochemical Company (NPC) Marzieh Shahdaei, Iran needs $55 billion for 60 projects in the petrochemicals sector over a period of 10 years.
Addressing the forum, she lauded Iran's achievements in 2016 as "dazzling" during which the country's petrochemical output hit 50 million tonnes.
"Net sales of petrochemical products last year reached 28 million tonnes worth $15 billion," Shahdaei said, explaining that 21 million tonnes were sold to foreign clients at a value of $9.4 billion.
The official said raising this figure to 72 million tonnes in the current year was "not out of reach", given "appropriate infrastructures and adequate feedstocks" which exist following Iran's conclusion of nuclear talks.
LPG markets
The country seeks to more than double this capacity in the next decade, which requires between $7 billion to $10 billion of annual investment.
The forum comes on the heels of another event, titled the 2nd Argus Iran LPG and Petrochemicals Conference, held in Tehran on Tuesday and Wednesday, during which Tehran signed its first LPG contract with India, according to the Shana news agency.
The conference was held "to explore the growing importance of Iran’s role in the global LPG and petrochemicals markets and develop new relationships to navigate the evolving landscape,” its organizers wrote on their website.
Foreign investment
Iran currently accounts for 17 percent of the LPG trade in the Middle East, with the share expected to grow to 40 percent by 2020. Three new LPG separation units at Phase 19 of Iran's South Pars development project came on stream last week.
Among foreign companies, Linde has said it had revived plant-engineering contracts in Iran that lay dormant for years under sanctions but could not act on them until there was a way to transfer money out of the country.
"We have already signed engineering contracts to resuscitate projects from years ago but the banking system has to be fixed first before we can start performing on these contracts," Reuters quoted Chief Executive Aldo Belloni as saying last month.
In February 2016, the NPC announced that Linde and Japan’s Mitsui Chemicals were planning to invest $4 billion in Iran’s petrochemical industry.
Share to
Related News
Iran’s petrochemicals exports income ups by $1.2 bln
Official: Iran’s output in South Pars equals with Qatar’s share
Tags
Iran ، oil ، petrochemicals
Your Comment