TEHRAN, April 23, YJC - Three Syrian forces have been killed in a fresh Israeli attack on a military camp near the southwestern city of Quneitra, a military official says. 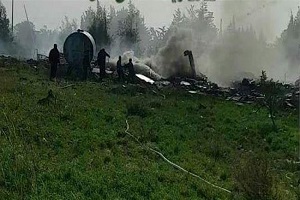 TEHRAN, Young Journalists Club (YJC) -The attack hit the al-Fawwar camp on Sunday, wounding two others, the unnamed official told the French news agency AFP.
It was not clear whether the assault was an airstrike or shelling. The attack comes after Israel struck a Syrian army position in the province of Quneitra on the Golan plateau on Friday, "causing damage."
A Syrian military source told the official SANA news agency that the Israeli aggression came after an attempt by terrorists to infiltrate military positions in Quneitra was foiled and the assailants suffered heavy losses.
The Israeli military confirmed the raid in a statement, saying it was conducted shortly after three mortar shells allegedly fired from Syria hit an open area in the northern occupied Golan Heights.
The Tel Aviv regime regularly hits positions held by the Syrian army in the Golan Heights, claiming that the attacks are retaliatory. Syria says the raids aim to help Takfiri militants fighting against government forces.
In the past, the Syrian army has confiscated Israeli-made arms and military equipment from terrorists fighting the government forces. There are also reports that Tel Aviv has been treating the extremists wounded in Syria.
Israel seized the Golan Heights from Syria after the 1967 Six-Day War and later occupied it in a move that has never been recognized by the international community.
The regime has built tens of illegal settlements in the area ever since and used the region to carry out military operations against the Syrian government.
Army advances against militants
Separately on Sunday, Syrian forces recaptured Halfaya town in the west-central Hama Province, the Lebanon-based al-Mayadeen TV channel reported.
Meanwhile, pro-opposition media reported fierce clashes between the so-called Free Syrian Army (FSA) militants and US-backed Syrian Democratic Forces (SDF) in the northern countryside of Hama.
US defense officials also told Fox News that the Daesh terrorist group is now centered in the city of Dayr al-Zawr, some 144 kilometers southeast of Raqqah, the Takfiri outfit’s de facto capital in Syria.
They said that US military drones have watched hundreds of Daesh "bureaucrats” or administrators, leaving Raqqah in the past two months.
Source:Press TV
Share to
Related News
Fourth round of Syria peace talks opens in Kazakh capital
West intervenes in favor of terrorists whenever army advances: Assad
Masked Israeli settlers attack group of activists, Palestinian shepherds
West blocking probe into suspected chemical attack in Syria: Assad
Tags
syrian ، attack ، military
Your Comment