TEHRAN, April 23, YJC - North Korea has threatened to give a nuclear response to any aggression, as a US-led strike group approaches the Korean Peninsula. 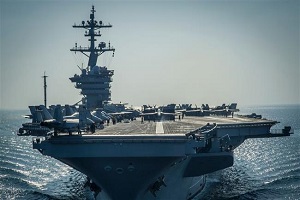 TEHRAN, Young Journalists Club (YJC) -Two Japanese navy ships joined an originally American strike group en route to Korean waters, Japanese sources said on Sunday.
The two Japanese warships left western Japan on Friday to join the Carl Vinson strike force in what is intended to be a show of force against North Korea, whose ballistic missile and military nuclear programs have caused concern in Washington.
North Korean media on Saturday quoted official sources as reiterating Pyongyang’s military readiness to respond to any aggression.
The US is "seeking to bring nuclear aircraft carrier strike groups one after another to the waters off the Korean Peninsula. Such intimidation and blackmail can never frighten” North Korea, a Foreign Ministry spokesman said in a statement.
The strike force includes the large aircraft carrier Carl Vinson. Trump had previously called the strike force a "very powerful armada.”
The US has called on China, which is North Korea’s main ally and economic benefactor, to help put pressure on Pyongyang to denuclearize. China has taken certain steps in that direction.
US Vice President Mike Pence, who is on an official visit to Australia, recently said, "The steps we’re seeing China take, in many ways unprecedented steps, bringing economic pressure to bear on North Korea are very welcome.”
The US official, however, called on Beijing to exert increased pressure on Pyongyang. "We do believe China can do more.”
Pence also once again warned North Korea that, "All options are on the table,” implying that the US was ready to invade North Korea.
Meanwhile, both North Korea and the US have downplayed the threats of military action by the other party.
Pentagon chief Jim Mattis called North Korea’s threats of launching a nuclear strike against the US "empty,” while Pyongyang said US officials were "spouting a string of rubbish” by threatening to invade North Korea.
North Korea warns US of 'preemptive strike' amid escalating tensions
War remains likely, nevertheless.
Pyongyang continues to pursue its military nuclear program, which it says acts as deterrence against a potential invasion by its adversaries, the US in particular.
Washington, for its part, maintains permanent US bases in allied countries Japan and South Korea, regularly holding joint military exercises with their forces.
Source:Press TV
Share to
Related News
‘Things can slip out of control,’ China says of North Korea tensions
North Korea ready to ‘go to the end’ in confrontation with US
China launches its first domestically-built aircraft carrier, its second overall
North Korea conducting live-fire drill amid tensions with US: South Korean media
North Korea says don't 'mess with us' as U.S. plans next move
North Korea to US: Be ready for ‘all-out war’
'Right time' to use huge bomb in Afghanistan: U.S. general
Tags
north korea ، japan ، aggression
Your Comment