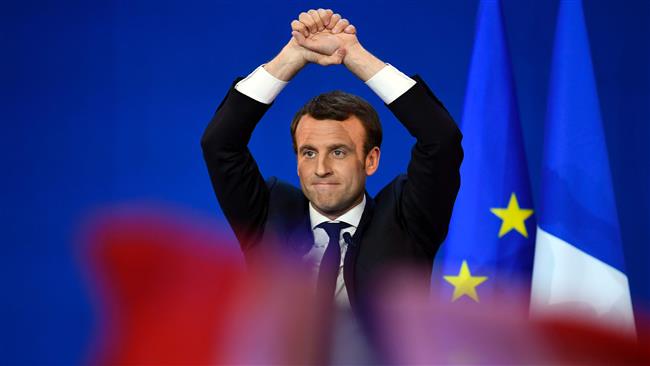 TEHRAN, Young Journalists Club (YJC) - According to final voting figures released by the Interior Ministry on Monday, Macron, a pro-EU ex-banker and former economy minister, won 23.75 percent of the votes against 21.53 percent for Le Pen.

According to new surveys, Macron is expected to win the runoff by 64 percent to 36.

In a victory speech for his supporters in Paris on Sunday, Macron called on all patriots to rally behind him in the battle against what he called the threat of nationalism. "In one year, we have changed the face of French politics," he said.

Macron stressed that, if elected, he will bring in new faces and talents to transform the French political system that "has been incapable of responding to the problems of our country for more than 30 years". "From today I want to build a majority for a government and for a new transformation. It will be made up of new faces and new talent in which every man and woman can have a place," he added.

The other elected contender for the run-off, Le Pen, launched a diatribe against the policies of Macron during her victory speech, warning that Macron’s deregulation policies would lead to unjust international competition against France's business interests, mass immigration and free movement of terrorists. "The great issue in this election is the rampant globalization that is putting our civilization at risk," she said.

German Chancellor Angela Merkel's spokesman hailed Macron's success. "Good that Emmanuel Macron succeeded with his policy for a strong EU and social market economy. Wishing him all the best for the next two weeks,” the spokesman tweeted.

In Brussels, the president of European Commission, Jean-Claude Juncker, has reacted positively to Macron’s success, expressing good wishes for him in the second round.

Following the announcement of the initial results, investors reacted positively to what the market regarded as the best of several possible outcomes.

In Asian markets, the euro soared two percent to $1.09395 when markets opened before slipping back to around $1.0886, the euro's highest level since the election of Donald Trump as the US president on November 10.

Moreover, US stock index futures rose sharply on Sunday as investors expect that Macron’s possible election will reduce the prospect of an anti-establishment market shock.

The final outcome of the French presidential poll is being anxiously monitored around the world as a sign of whether the populist tide that saw Britain vote to leave the EU and Donald Trump’s election in the United States is still rising or starting to ebb.

About 50,000 police and 7,000 soldiers have been deployed around France to protect voters in the wake of a policeman’s killing on Thursday.