TEHRAN, April 24, YJC - Hundreds of thousands of faithful pilgrims thronged the mausoleum of Imam Moussa Kadhim a.s. in Baghdad Sunday for the climax of a week-long pilgrimage that saw millions converge on the Iraqi capital. 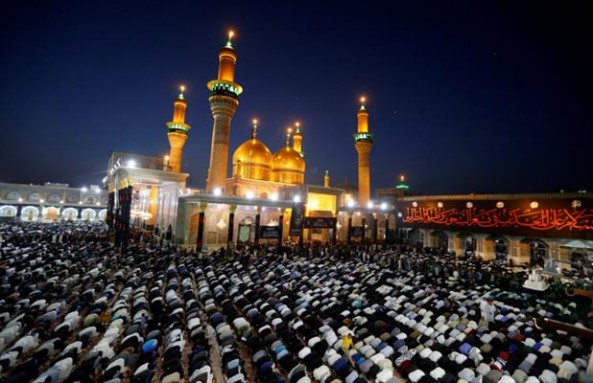 TEHRAN, Young Journalists Club (YJC) - Crowds of pilgrims took to streets in a mocking funeral of Imam in the northern neighborhood of Kadhimiyah.

"This visit means a lot to us, it is about showing respect for the suffering of the imam and the injustice he faced and about reaffirming our dedication to him,” said Ahmad Jamal, a 28-year-old civil servant in the crowd of pilgrims.

Imam Kadhim a.s., the seventh of 12 revered imams in Shiite Islam, was martyred in 799 AD. The commemoration has been a huge event that brings the Iraqi capital to a standstill for days.

The organizers estimated that around 10 million people came to Kadhimiyah for the commemoration in recent years, which is still less than the 17 million faithful said to have visited the southern shrine city of Karbala for the Arbaeen pilgrimage last year.

Many of the main thoroughfares have been blocked to traffic for days to minimize the risk of terrorist car bombs and allow the pilgrims to reach the shrine. Some of them walk several days, mostly from southern Iraq.