May ready to launch nuclear weapons as a first strike: Fallon

TEHRAN, April 25, YJC -British Prime Minister Theresa May will use nuclear weapons “as a first strike” against UK’s enemies, even if the country is not directly attacked, says Defense Secretary Michael Fallon. 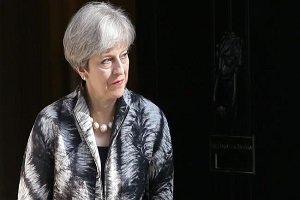 TEHRAN, Young Journalists Club (YJC) -"In the most extreme circumstances we have made it very clear that you can’t rule out the use of nuclear weapons as a first strike,” Fallon told state-funded BBC on Monday.
Asked what the circumstances would be, the British Defense chief said, "They are better not specified or described, which would only give comfort to our enemies and make the deterrent less credible.”
He further argued that "The whole point about the deterrent is that you have got to leave uncertainty in the mind of anyone who might be thinking of using weapons against this country.”
Later in the day, Fallon’s spokesman asserted that there was "no reason to disagree with what the defense secretary said.”
Last year, a vote in the House of Commons saw MPs vote for Trident’s renewal, which would cost billions of pounds.
Activists oppose the renewal of Trident, describing it as a violation of international commitments, unsafe and ill-suited for contemporary warfare.
Source:Press TV
Share to
Related News
UK threat of nuclear strike deserves harsh response: Russia MP
Macron, Le Pen in French presidential runoff: Preliminary results
Corbyn might suspend UK airstrikes in Syria if elected prime minister
Voting underway in French presidential election
Tags
may ، weapons ، fallon ، strike
Your Comment