Iran, India call for closer cooperation in fight against terrorism

TEHRAN, April 26, YJC - The Iranian and Indian defense chiefs have emphasized the need for a “decisive” fight against terrorism as well as bilateral defense cooperation with that end in sight. 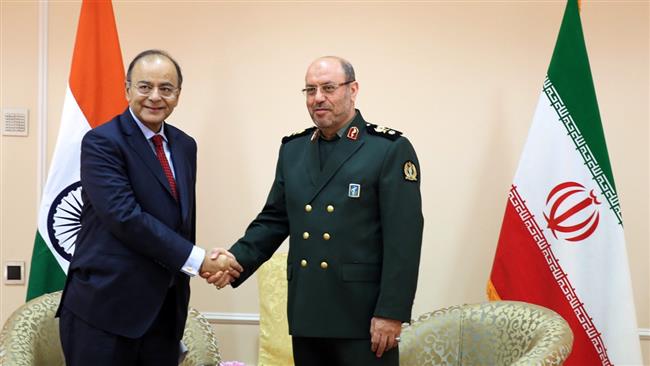 TEHRAN, Young Journalists Club (YJC) - Iran’s Defense Minister Brigadier General Hossein Dehqan and his Indian counterpart Arun Jaitley made the remarks during a Wednesday meeting in the Russian capital, Moscow, which is hosting a two-day forum dubbed the Conference on International Security.

During the meeting, Dehqan said closer bilateral political, military, and security cooperation between Iran and India can "remarkably contribute to regional security standards, and have an extraordinary impact on the development of lasting peace and stability.”

He further said the current status of Tehran-New Delhi should reach the strategic level, adding that the two sides could share experiences and cooperate in fighting extremism, terrorism, drug smuggling and piracy.

Jaitley, for his part, said India does not differentiate between various forms of terrorism, asserting that the country "has an incisive position” regarding the scourge, and that "there is no obstacle to cooperation in the area.”

The commonalities in the two nations’ history and civilization have created a mutual interest in the expansion of bilateral relations in all spheres, he added.

Dehqan, who is in Moscow at the head of a defense delegation, is slated to address the conference later in the day. He will also be meeting with Russia’s Defense Minister Sergei Shoigu as well as other world defense chiefs.

The two officials will separately be holding talks with their Syrian counterpart Fahd Jassem al-Freij in a trilateral session aimed at addressing the latest developments in the Arab country as well as counterterrorism efforts.