TEHRAN, May 1, YJC - The military top brass of Iran and Syria have denounced the attacks by the Israeli regime and US against the Arab country and vowed to boost their cooperation. 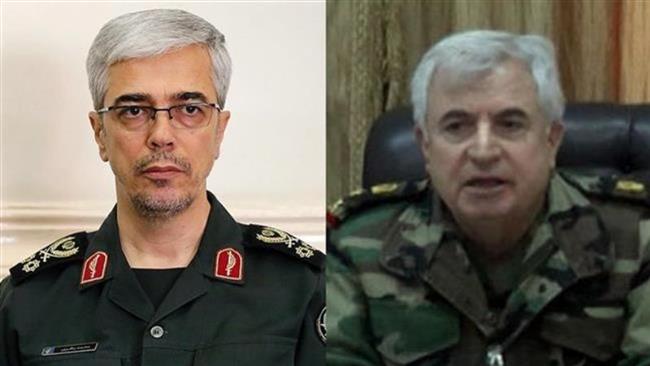 TEHRAN, Young Journalists Club (YJC) - Chief of Staff of the Iranian Armed Forces Major General Mohammad Baqeri and his Syrian counterpart, General Ali Abdullah Ayoub, held talks in Tehran on Monday.
Baqeri said the Syrian Army and nation have put up brave resistance in the face of crimes by Takfiri terrorists and regional aggression and intervention.
He commended the recent major achievements by the Syrian Army and nation in fully liberating the city of Aleppo from the control of terrorists and releasing the people in the Shia-populated villages of al-Fua'a and Kefraya from the captivity of terrorists.
The Iranian military official further condemned the US and Israeli regime’s recent airstrikes against Syria, saying, "By maintaining their unity and national solidarity as well as holding Syrian-Syrian talks, the Syrian people must be prudently vigilant about foreign plots aimed at creating rifts in this country.”
Ayoub, for his part, said Iran’s military advisory support for his country had played a decisive role in the continuation of the Syrians’ resistance and their major victories against terrorists and the Israeli regime.
Iran has been providing military advisory support to Syria as well as Iraq in their campaign against terrorism at the request of the two countries’ governments.
The Syrian military official added that independent countries across the world hail the Islamic Republic’s wise policies on supporting peace and stability in the region and the Muslim world and respecting the sovereignty and unity of regional states.
Heading a high-ranking military delegation, Ayoub arrived in Tehran on Monday to hold talks with Iranian officials on ways to strengthen relations between the two countries’ armed forces and improve coordination on the latest political and military situation in Syria.