TEHRAN, May 4, YJC - Damascus says it fully supports a Russian proposal for the establishment of de-escalation zones in Syria, in an initiative meant to boost the ceasefire in the Arab country and facilitate the progress of peace talks between the warring sides. 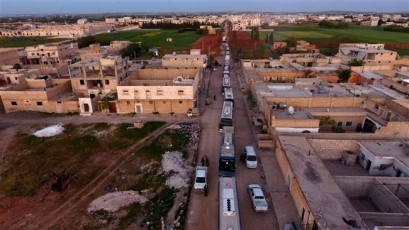 TEHRAN, Young Journalists Club (YJC) - Late Wednesday, Syria’s official news agency SANA cited a Foreign Ministry source as saying that Damascus backs the Russian plan and remains fully committed to the countrywide ceasefire deal it signed with the militants last December.The support, the source added, is in line with the Syrian government’s commitment to protecting the lives of people, helping them return to their normal lives and raising the living standard of citizens who have suffered from the foreign-backed crisis in the country.
The report also emphasized the Syrian army’s determination to continue its battles against Daesh and Jabhat Fateh al-Sham as well as other affiliated Takfiri terror groups across the country.
The Russian plan was put forward on Wednesday, the first day of the fourth round of peace talks between the Syrian government and opposition groups in Astana, Kazakhstan.
Based on the proposal, four hot spots would be singled out in the areas where the most intense fighting is underway between the Syrian government and different militant groups.
AFP cited a version of the initiative provided by a source close to the opposition as saying that the de-escalation zones would be created in the Syrian provinces of Idlib and Homs as well as the Eastern Ghouta region near Damascus.
However, reports say the details are being worked out, and the document would be ready for signing later on Thursday.
The Astana process, which started in January, is being mediated by Iran, Russia and Turkey, the three guarantors of the ceasefire in Syria. Tehran and Moscow are allies of the Syrian government, while Ankara supports different militant groups.
Summarizing the first day of the talks, Russia’s special presidential envoy for Syria, Alexander Lavrentiev, said that Moscow’s initiative would help separate Daesh and Jabhat Fateh al-Sham terrorists from other militants in conflict zones.
"As you know, the Russian Federation is making intensive efforts to promote the Syrian peace settlement and is developing various schemes to strengthen the ceasefire agreement and make this agreement more effective,” added Lavrentiev, who is leading Moscow’s delegation in Astana.
The new round of Astana negotiations also marks the first time the US is represented by a senior diplomat. Acting Assistant Secretary of State for Near East Affairs Stuart Jones is attending the talks.
On Wednesday, Russian President Vladimir Putin and his Turkish counterpart, Recep Tayyip Erdogan, voiced support for the de-escalation zones.
However, hours after the start of the fourth round, the so-called Syrian National Coalition (SNC), an opposition delegation, suspended its participation in the talks, calling on the government to end its airstrikes.
The UN’s Syria envoy, Staffan de Mistura, called on the militants to return to the negotiating table "because what is important is also to look at the possibility of an outcome on a de-escalation.”
He stressed the importance of not destroying "the opportunity of good news” related to this issue.
Lavrentiev also dismissed the militants’ ultimatum as a bid to put pressure on Moscow, Tehran and Ankara. "The Syrian opposition must participate in the talks,” he said. "We hope common sense prevails.”
However, the RIA news agency quoted a source close to the negotiations as saying that the armed opposition would return to the talks on Thursday.