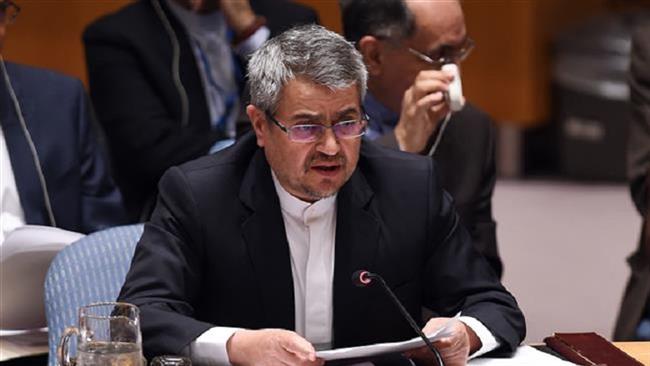 TEHRAN, Young Journalists Club (YJC) - "It is imperative for the international community to take necessary action to compel Saudi Arabia to stop its reckless sponsorship of terrorism and extremism in the region and across the globe," Khoshrou wrote in a Thursday letter to UN Secretary General Antonio Guterres and the Security Council.
The Iranian diplomat expressed Tehran’s preparedness to hold dialogue with Saudi Arabia to promote regional peace despite "unlawful and inflammatory" remarks by the Saudi deputy crown prince, Mohammed bin Salman Al Saud, against Iran.
On Tuesday, Salman, who is also Saudi Arabia’s defense minister, ruled out ties with Iran after Tehran announced the possibility of de-escalation of tensions if Riyadh halted its war against Yemen.
Earlier in the day, Iranian Foreign Minister Mohammad Javad Zarif said the Islamic Republic was ready to normalize ties with Riyadh if the Kingdom halted its bombardment of Yemen and stopped supporting extremist groups.
Salman also said that any struggle for influence between Iran and Saudi Arabia has to take place "inside Iran, not in Saudi Arabia,” without elaborating on the remark.
He stressed that talks with Iran were impossible as Tehran’s goal was to "control the Muslim world.”
"We have no desire, nor any interest, in an escalation of tension in our neighborhood," Khoshrou's letter read.
"We continue to stand ready for dialogue and accommodation to promote regional stability, combat destabilizing extremist violence and reject sectarian hatred," the letter wrote.
"We hope Saudi Arabia will be persuaded to heed the call of reason," it added.
Saudi Arabia has been incessantly pounding Yemen since March 2015 in an attempt to bring back to power the resigned president, Abd Rabbuh Mansur Hadi, who is a staunch ally of Riyadh, and to undermine the Houthi Ansarullah movement. The Riyadh regime has, however, failed to reach its goals despite suffering great expense.
The military aggression has claimed the lives of more than 12,000 people, most of them civilians.