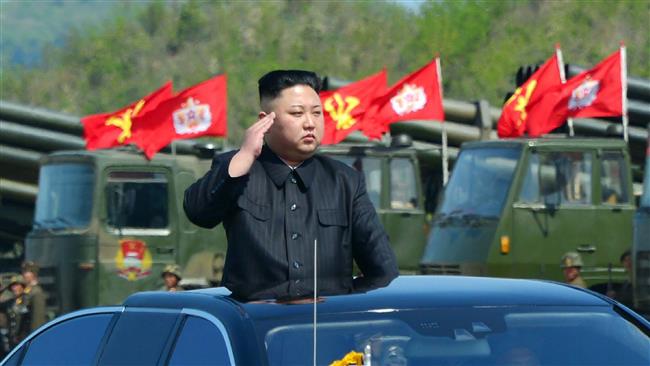 TEHRAN, Young Journalists Club (YJC) - The North’s ministry of state security said in a statement on Friday that the CIA "assassination by use of biochemical substances including radioactive substance and nano poisonous substance is the best method that does not require access to the target.”
The statement called the plot equivalent to "the declaration of a war” by the United States against North Korea.
This comes as tensions between Pyongyang and the administration of President Donald Trump escalates over US military build-up on the Korean Peninsula and the North’s carrying out nuclear and missile tests.
The statement said the CIA and the South Korean intelligence services have "ideologically corrupted and bribed a DPRK citizen surnamed Kim” to murder the North Korean leader.
"We will ferret out and mercilessly destroy to the last one the terrorists of the US CIA and the puppet IS [intelligence service] of South Korea,” the statement said.
"The heinous crime, which was recently uncovered and smashed in the DPRK, is a kind of terrorism against not only the DPRK but the justice and conscience of humankind and an act of mangling the future of humankind,” it added.
In a surprising move earlier this week, US President Donald Trump said he "would be honored” to meet North Korean leader, a day after Trump praised Kim as "a pretty smart cookie.”
"'I can tell you this, and a lot of people don't like when I say it, but he was a young man of 26 or 27 when he took over from his father, when his father died. He's dealing with obviously very tough people, in particular the generals and others,” Trump told NBC News on Sunday.
Tensions with North Korea have soared in recent weeks. The Trump administration has repeatedly warned "all options are on the table" regarding North Korea.
It has repeatedly threatened Kim with a military response to new tests of missiles and nuclear warheads, and sent warships and a nuclear submarine to Korean waters.
Trump even ordered two major attacks in Syria and Afghanistan last month, both of them viewed as stern warnings to the North.
North Korea, in response, has increased its missile tests and even hinted at a new nuclear test in the coming weeks. It has also warned the US and its regional allies like South Korea and Japan of a strong military response in case of any invasion.
Despite sanctions and international pressure, Pyongyang has been attempting to strengthen its military capability to protect itself from the threat posed by the presence of US forces in the region.
North Korea says it will not give up on its nuclear deterrence unless Washington ends its hostile policy toward Pyongyang and dissolves the US-led UN command in South Korea. Thousands of US soldiers are stationed in South Korea and Japan, Presstv reported.
According to the US military’s recent declaration, the United States has 806 deployed ICBMs (intercontinental ballistic missile), SLBMs (submarine-launched ballistic missile), and heavy bombers as well as 1,722 deployed nuclear warheads.
The Pentagon is also equipped with a multiple independently targetable reentry vehicle (MIRV), a highly advanced version of the intercontinental nuclear missile carrying several independent warheads.
Share to
Related News
Iran exporting nano products to 20 countries
No part of Israel immune to resistance missiles in any future war: Nasrallah
CIA opens new center to monitor North Korea
North Korea vows revenge over failed attempt to poison Kim
Tags
CIA ، North Korea ، Kim Jong-un
Your Comment