Corruption has overwhelmed our system

Tehran, YJC. Candidate says that at a time when corruption rages in the country, to fight it one must start from top authorities. 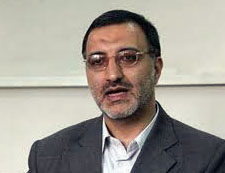 Alireza Zakani, Secretary General of the Society of the Followers of the Islamic Revolution said "It is to regret that corruption has overwhelmed the system. In 2001 the Supreme Leader in his 8-article mandate ordered heads of the branches and other officials to practical, and not propaganda, fight with corruption.”

Zakani provided comments on his corruption-fighting history, saying "In the 7th term parliament I brought the Minister of Intelligence before the Majlis for the first time for the wrong that had been done to the nation by the ministry’s economic deputy.”

He added "They tried for six whole months to convince me that to interpolate the Intelligence Minister was not in the interest of the country and will weaken the minister. But I told them that the system of the Islamic Republic of Iran is weakened with corruption and we must start the crusade against corruption from those closest to power.”

"The night before the interpellation a Director General of the Ministry’s came to me and said ‘You can make deal with the Minister the same way the 6th-term lawmakers did’, but I said sorry,” further said Zakani, who is running for presidency.

He added "The next morning, as they found out that I would not make deals, another Director General of the ministry threatened me, but I was steadfast and brought the Minister to the open session. After his 18-min explanations I declared not convinced. In the National Security Committee they ruled in my favor and convicted the Intelligence Ministry, which made them expel the Economic Deputy of the Intelligence Ministry.”

Share to
Related News
Haqshenas: Kavakebian no Reform representative if not resigned for Hashemi
Tags
2013 elections
Your Comment