TEHRAN, May 12, YJC - More Palestinian prisoners are joining the mass hunger strike which entered its 26th day Friday, with the campaign assuming global proportions amid worsening health conditions of hundreds of strikers languishing in Israeli jails. 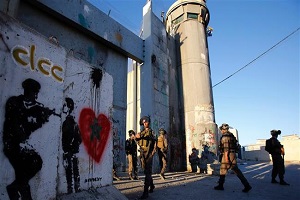 TEHRAN, Young Journalists Club (YJC) -Sawt al-Asra (Voice of Prisoners) radio cited anonymous sources as saying that nearly 100 Palestinian inmates from different political factions have decided to join the hunger strike.
The radio estimated that nearly 1,800 prisoners are currently participating in the strike. However, the Palestinian Prisoners’ Club put the figure far higher, saying more than 3,000 prisoners are taking part in the strike.
Israeli authorities have, however, claimed that fewer than 1,000 prisoners are participating in the strike.
The Fatah Central Committee, considered the Palestinian movement’s top decision-making body, called on Thursday for all its members in Israeli prisons to join the hunger strike immediately.
According to the Palestinian Prisoners’ Club, 1,000 others are expected to join in the wake of the Central Committee resolution.
In South Africa, a number of cabinet ministers, personalities, activists and political leaders vowed to join a 24-hour fast in solidarity with the hunger-striking Palestinians.
According to Palestinian prisoner solidarity network Samidoun, activists from the US, France and Belgium have also launched a short hunger strike in solidarity with the Palestinian prisoners.
Meanwhile, the National Committee for Supporting the Strike on Thursday called a "day of anger” across the occupied Palestinian territory.
Deteriorating health conditions
On Thursday, the Palestinian Committee of Prisoners’ Affairs warned about the "tragic” health conditions of the hunger strikers, as prisoners experienced severe dehydration, stomach aches, headaches, irregular heartbeats, and low blood pressure.
The committee said the situation of the hunger strikers is at a level of "extreme danger,” as most of them have lost between 15 and 25 kilograms, with some of them starting to vomit blood.
Meanwhile, the spokesman for the Palestinian Prisoners’ Center for Studies, Riyad al-Ashqar, said that Israel Prison Service (IPS) authorities in the Ketziot detention center have refused to transfer dozens of hunger strikers to hospitals and have kept them in infirmary.
The IPS is also pressuring prisoners to end their hunger strikes in exchange for receiving medical care, Ashqar said.
The IPS officers have also reportedly blocked some cells’ windows to deny hunger strikers access to sunlight.
The strikers are demanding basic rights, such as an end to the policies of administrative detention, solitary confinement and deliberate medical negligence.
The much criticized administrative detention is a policy under which Palestinian inmates are kept in Israeli detention facilities without trial or charge.
Back in 2012, a similar hunger strike, involving some 2,000 Palestinian inmates, ended after an agreement was reached with Israeli authorities to terminate the policy of internment without trial or charge.
Nearly 700 prisoners are currently held in administrative detention. Some of the inmates have been held in prison under the policy for up to 11 years.
Source:Press TV
Share to
Related News
Palestinians go on a mass general strike across WB, Green Line
76 Palestinian hunger strikers in critical condition in Israeli jail
De-escalation plan won’t fail in light of Tehran, Moscow support: Assad
Palestinian hunger strikers urge Pope to speak out against Israel
Palestinian activists slam Pizza Hut for mocking Barghouti
Tags
palestinian ، strike ، dramatic
Your Comment