Shariatmadari: If President I will take care of Karoubi, Mousavi

Tehran, YJC. Candidate says that he will use all his power to take care of Karoubi and Mousavi once President.

Mohammad Shariatmadari’s campaign staff said that in his meeting with the people of Yasouj, he said "If I am elected President, 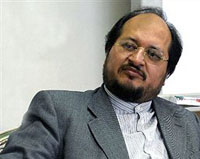 I will use what power I have to take care of Mirhossein and Karoubi and I will sure take effective steps.”

He added "There are some hindrances that wont let those who care for the country gather around and serve the country.”

He asserted "The diplomatic structure of the country must change to use all potentials and the elite, caring forces instead of throwing away those forces which the system has invested in and are now replete with experience and know-how.”

"Many of the elite officials who used to serve in the Rajaee administration are now busy in places like ketchup factories. These people must be taken back to administrative positions,” Shariatmadari asserted.

He also said "We have to see that someone who was once a trustee of the Leader now has no role in decision-makings. In fact the collective wisdom and power of these precious people is not tapped into.”

|
0
0
Answer
the result of the eotleicn would not be decided on the streets.He used a speech during prayers at Tehran University to attack the West, especially Britain, and declare strong support for Mahmoud Ahmadinejad, the hardliner who was declared the winner of the poll."Street demonstrations should end," he said. "If they don't, leading politicians will be held accountable for the chaos."The result of the eotleicn comes out of the ballot box, not from the street."The candidates in the eotleicn should be very careful what they say and how they behave. If they want to break the law, they will be responsible for the bloodshed, for the riots taking place and for any form of unrest."Ayatollah Khamenei blamed the street protests on foreign powers intent on destroying the Islamic regime. "Observe the hands of your enemies," he said. "There are hungry wolves ambushing us and removing the diplomatic cover from their faces. They are showing their real faces. And the most evil of them all is the British Government."The attack prompted the Foreign Office to summon the Iranian ambassador in London for a dressing down.President Obama told US broadcaster CBS: "I'm very concerned, based on some of the tenor and tone of the statements that have been made, that the Government of Iran recognise that the world is watching."And how they approach and deal with people who are, through peaceful means, trying to be heard will, I think, send a pretty clear signal to the international community about what Iran is and is not."Previously President Obama has said he did not want to be seen to be meddling in Iran's affairs. But in a clear change White House spokesman Robert Gibbs said the protests were "extraordinary" and "courageous".The US House of Representatives and Senate voted overwhelmingly for a resolution condemning violence directed at supporters of former prime minister Mir Hossein Mousavi.Protests began a week ago after officials announced that Mr Ahmadinejad had been re-elected as president with 63 per cent of vote. Mr Mousavi, who came second in the official tally, disputed the result.The President's stance was backed by British Prime Minister Gordon Brown who has vowed to speak out against abuses in Iran."I believe it is right for us to speak out for human rights, to speak out against repression, to speak out in condemnation of violence, to speak out where a free media is prevented from doing its job and we will continue to do that," he said after an EU summit in Brussels.On Tuesday Iran summoned British and Czech ambassadors to the foreign ministry in Tehran to protest against the reaction from London and the European Union to the post-election unrest."We are not the only country who is speaking out, the whole of the world is speaking out," Mr Brown said. "It is for Iran to show the world the eotleicns have been fair."Officials in Tehran took a cue from the Supreme Leader and made it clear that further dissent would be crushed. It remained uncertain if Mr Mousavi would climb down following a threat that the regime would unleash the Basij militia, a thuggish force set up to defend clerical rule
Your Comment