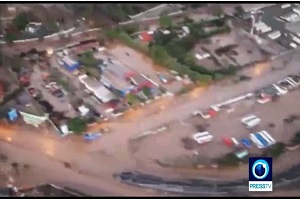 TEHRAN, Young Journalists Club (YJC) -Floodwaters inundated the city of Chanaral in the Atacama region after a nearby river burst its banks on Saturday.
The deluge caused damage to public and private property in the area and forced more than 2,000 people out of their homes. It also left several cars and other vehicles stranded on the waterlogged streets.
At least 14,000 people are without electricity while more than 90,000 people in the region do not have access to fresh drinking water at the moment, according to local authorities.
Chilean Vice President Mario Fernandez, however, said everything was under control.
The Chilean government’s national emergencies office, known as ONEMI, has put the area on red alert and reported that several communities, including Chanaral, had been evacuated.
Over 1,300 are taking refuge in shelters and some 3,000 homes are believed to have been affected, according to ONEMI.
Source:Press TV
Share to
Related News
6,000 evacuated as forest fire sweeps through central Chile
Violence erupts between police, striking miners in Chile
Chile's worst wildfire destroys town as help arrives
Tags
flooding ، chile ، torrential
Your Comment