TEHRAN, May 14, YJC -The Syrian military is about to re-establish control over another district in the capital Damascus’ countryside after the government reaches an agreement with the militants enabling their evacuation. 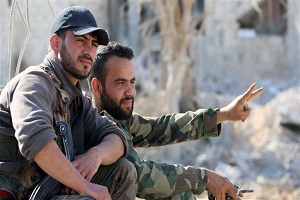 TEHRAN, Young Journalists Club (YJC) -The state television announced the development on Sunday, and AFP reported that 10 buses had arrived at Qaboun District to take the militants and their families to the northeastern Idlib Province as per the deal.
Latest estimates showed that more than 1,000 people were still in the district.
Such agreements had brought about evacuation of nearby Barzeh and Tishrin Districts earlier in the week.
The districts are located in Damascus’ eastern side.
Militants waged a wholesale offensive against the districts earlier in the year, in their most daring push against the capital since 2013.
The militant onslaught followed their capture and then surrendering of the capital’s water resources.
It was also interspersed by Israeli aerial attacks targeting the Lebanese resistance movement of Hezbollah, which has been helping Damascus fight off the militants.
The foreign-backed militancy began in 2011, featuring proxy fighting in the Arab country on behalf of regional and extra-regional countries, such as the United States, Qatar, and Turkey.
While the militancy has claimed thousands of lives among the Syrian civilians and forced millions-strong internal and external displacements, the militants complain that Damascus’ is trying to bring about demographic change in the Arab country by concluding the evacuation deals. The authorities reject the claim.
Also forcing the rebels to lay down their arms was the military’s cutting off the tunnels linking Qaboun and Barzeh.
Source:Press TV
Share to
Related News
Family of Saudi Wahhabism founder disowns Qatar emir amid tensions
Multiple fatalities as Daesh hits Syria refugee camp
Israel hacked Lebanese phones during Nasrallah speech: Lebanon
China calls for greater counter-terrorism cooperation with Turkey
Saudi prince will seek Trump’s backing for confrontation with Iran: Writer
Tags
syria ، control ، Damascus
Your Comment