Cholera has claimed 115 lives in Yemen since April 27: ICRC

TEHRAN, May 14, YJC - The International Committee of the Red Cross (ICRC) says cholera has claimed the lives of at least 115 people in Yemen and left thousands of others ill as hospitals struggle to cope with an influx of patients in the conflict-plagued impoverished Arab country. 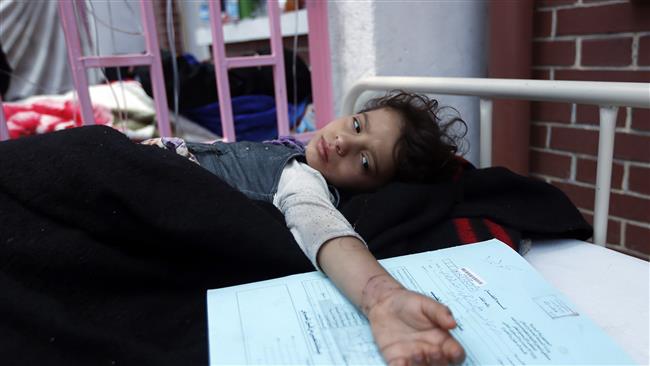 TEHRAN, Young Journalists Club (YJC) - Dominik Stillhart, the ICRC director of operations, said in a news conference in the Yemeni capital, Sana’a, on Sunday that the deaths occurred between April 27 and May 13.
"We now are facing a serious outbreak of cholera," Stillhart said, citing figures compiled by the Yemeni Health Ministry.
Over 8,500 suspected cases of the waterborne disease were reported in the same period in 14 governorates across Yemen, Stillhart added.
The latest figures are up from 2,300 cases in 10 governorates last week.
Elsewhere in his remarks, Stillhart said hospitals were filled beyond capacity with patients displaying symptoms of cholera.
"There are up to four cholera patients in one single bed," Stillhart said, adding, "There are people in the garden, and some even in their cars with the IV drip hanging from the window."
Sherine Varkey, a UNICEF deputy representative, said patients spilled out of hospital rooms into the corridors of Sabeen hospital in Sana’a on Saturday.
"So the situation of the ongoing cholera outbreak is extremely serious. I am standing here in the corridor of the Al Sabeen hospital, which is the apex hospital for maternal and child care in the entire country, and it is shocking to see the number of patients who have spilled across the rooms onto the corridor. The capacity of the hospital is really been compromised with a lot of patients coming to the hospital. These are patients who are suffering from acute watery diarrhea, many of them could be having cholera and this is a matter of urgency and all the partners are trying their best to really reach out and support these hospitals to cater to these children."
"Here at the Al Sabeen hospital, in the diarrhea treatment ward, and the situation is really overwhelming. This is the Al Miswary family. The four children of this family are all suffering from diarrhea, one of them is seriously ill," Varkey said.
Hussein El Haddad, the director of Sabeen hospital, said, "The situation is very bad. The children that are suffering from cholera are countless and there aren't enough beds, the technical know-how [in the hospital] is also insufficient to deal with the situation we are facing."
The United Nations has said that only a few medical facilities are still functioning and two-thirds of the population are without access to safe drinking water.
The World Health Organization now classifies Yemen as one of the worst humanitarian emergencies in the world.
Last October, the UN health agency announced the grim news of cholera outbreak in Yemen, and three weeks later the number of cholera cases across the country soared to hundreds.
Last year, nearly 130 people lost their lives due to an outbreak of cholera and acute watery diarrhea in Yemen.
Cholera, which causes severe diarrhea and dehydration, is transmitted through contaminated drinking water and could prove fatal in up to 15 percent of untreated cases.
Over two years of Saudi Arabia's war on the impoverished country has put more than half of all health facilities in Yemen in a state of complete or partial shutdown.
Nearly 3.3 million Yemeni people, including 2.1 million children, are currently suffering from acute malnutrition, with more than seven million Yemenis facing starvation. The UN has warned that 17 million people are at imminent risk of famine in Yemen.
Since March 2015, the Saudi regime has been engaged in a brutal campaign against Yemen in an attempt to reinstall Abd Rabbuh Mansour Hadi, the president who resigned and is a staunch ally of Riyadh. The campaign also aims to crush the Houthi Ansarullah movement. The Saudi regime has failed to achieve its objectives.
Latest tallies show that the Saudi war on Yemen has so far killed over 12,000 Yemenis and wounded thousands more.

Share to
Related News
600,000 Yemeni people could contract cholera by end of 2017: ICRC
WHO says 1,146 killed due to cholera in Yemen since April
Pakistani politicians blast Saudi-led coalition amid row with Qatar
Cholera in Yemen
Tags
yemen ، cholera ، war
Your Comment