TEHRAN, May 16, YJC - Israeli forces have clashed with the Palestinian protesters who had turned out across the West Bank to commemorate the 69th anniversary of the Nakba Day (the Day of Catastrophe).

TEHRAN, Young Journalists Club (YJC) - Scuffles broke out in the city of Bethlehem on M 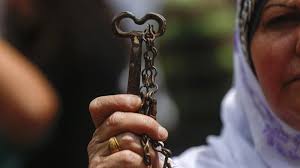 onday after the Israeli forces fired tear gas and sprayed skunk water at the Palestinian demonstrators.

At least three people were injured and sent to the hospital for treatment while numerous others suffered respiratory problems due to the inhalation of tear gas in Bethlehem.

During the clashes, Palestinians threw rocks at Israeli forces and set fire to tires and garbage containers and blocked the streets with them.

The Nakba Day is marked annually on May 15. It refers to the forcible expulsion of some 750,000 Palestinians from their lands in 1948 and their scattering across refugee camps in the occupied West Bank, the Gaza Strip, and neighboring countries. Now, over five million Palestinians are estimated to be displaced across the world.

The rally turned violent near the Israeli Beit El settlement after the Israeli forces fired tear gas, rubber-coated steel bullets, and Tutu bullets at the crowd.

Many of the protesters were clad in black T-shirts with the number 1948 written on the back. They also carried a large Palestinian flag and a black flag bearing the slogan "We shall return.”