Over 500 killed in DR Congo unrest since March: Army

TEHRAN, May 17, YJC - More than 500 people have been killed during heavy fighting between government forces and tribal militia in the Democratic Republic of Congo (DRC) over the past two months, the army said. 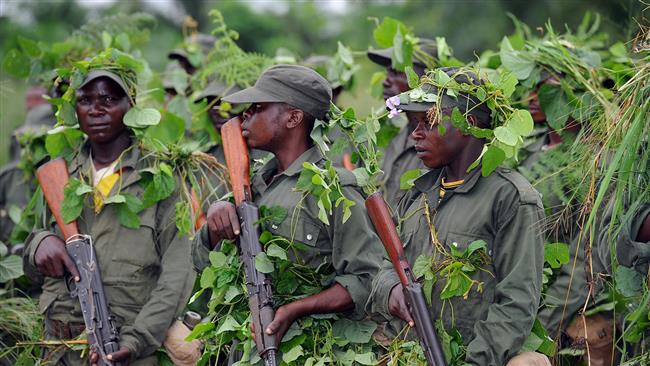 TEHRAN, Young Journalists Club (YJC) - "DRC’s armed forces have been waging operations to back up the police since end March in Kasai,” the army’s Brigadier General Leon-Richard Kasonga told a news conference on Monday.
According to Kasonga, there were 390 tribal militia fighters and 124 government forces among those killed in the violence gripping the country’s central Kasai region.
"Our troops respect international humanitarian law and human rights... we have acted professionally,” said Kasonga, without providing a civilian death toll.
The unrest was triggered by the killing of tribal chief Jean Pierre Mpandi, also known as Kamwina Nsapu, by army troops last August. The tribal leader had launched an uprising against President Joseph Kabila.
The Kamuina Nsapu uprising has become the most serious threat to the administration of Kabila, whose refusal to step down following a defeat in the latest polls sparked chaos in the vast central African country.
Kabila’s presidential term expired on December 19, 2016, but ruling officials have effectively prolonged his mandate until 2018, claiming that the government would not be able to arrange elections before then, Presstv reported.
Recently, the United Nations warned against the deteriorating humanitarian situation in the country. It said about 100,000 people were uprooted in the first week of May alone, bringing the ranks of the displaced in the central Kasai region to nearly 1.3 million.
The world body has issued several warnings against inter-ethnic fighting in the Kasai region.
The DR Congo is suffering from outdated infrastructure and a festering war with numerous rebel groups in the east, which has left more than 5.5 million people killed since 1998.
Adding up to the country’s security woes is a new Ebola outbreak, which has claimed three lives there in recent days. Last week, the World Health Organization described the situation as a public health crisis of international importance.
More than 11,000 people died in the Ebola outbreak in West Africa in 2014-2015, mainly in Guinea, Sierra Leone and Liberia.