TEHRAN, May 21, YJC -The military court in the Israeli-blockaded Gaza Strip has delivered death sentences to three Palestinians responsible for the assassination of one of the high-ranking military commanders of Hamas resistance movement earlier this year. 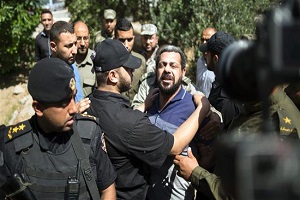 TEHRAN, Young Journalists Club (YJC) - The Ministry of Interior and National Security in Gaza announced on Sunday that the court found Ashraf Abu Leila, the prime suspect in the assassination of 38-year-old military commander Mazen Fuqahaa, guilty of premeditated murder, treason and conspiracy with hostile foreign parties, and sentenced him to hang.
The others were identified as Hisham al-Aloul, 44, who was also sentenced to hang, and Abdallah al-Nashar, who was to face the firing squad. They were all convicted of collaborating with the Israeli regime.
Aloul was convicted of conspiracy and treason as well as involvement in the killing of the senior Hamas commander.
Nashar was found guilty of treason and conspiracy, and leaking information about Fuqahaa’s movements and his hangouts.
Chairman of the Hamas-run military judiciary, Brigadier General Nasser Suleiman, said Sunday's verdicts are final and cannot be appealed according to the rules of the Military Field Tribunal.
Speaking at a press conference in Gaza City on May 11, the new chief of Hamas’s political bureau said Palestinian security forces in the Gaza Strip had detained Fuqahaa's assassin.
Ismail Haniyeh stated that a fair and appropriate punishment would be handed out on the basis of the movement’s judicial principles, and in honor of Fuqahaa, all Palestinian martyrs as well as all prisoners in Israeli jails.
The Hamas chief stressed that the Israeli regime was behind the criminal act.
"The Israeli occupation is the entity that gave orders regarding Fuqahaa’s assassination. The killer has confessed to the crime and spelled the assassination out in details,” Haniyeh pointed out.
Fuqahaa was shot in the head four times at the entrance to a residence in the Tal al-Hawa neighborhood of Gaza City on March 24.
Izzat al-Rishq, a member of Hamas's political bureau, said the assassination was carried out with a gun equipped with a silencer.
Share to
Related News
Criminal trial of South Korea’s ousted president begins in Seoul
Hamas security forces arrest man behind assassination of top Hamas cmdr.
Mass hunger strike begins in Israel jails
Hundreds of Israeli settlers, extremists attack al-Aqsa Mosque
Tags
hamas ، kill ، death
Your Comment