TEHRAN, May 23, YJC -The US Supreme Court has rejected two congressional district maps in the state of North Carolina, saying Republican legislators illegally used race to draw up the boundaries. 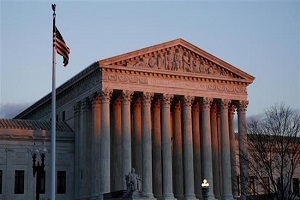 TEHRAN, Young Journalists Club (YJC) -The top court ruled on Monday that the maps for two of the North Carolina’s 13 congressional districts were predominantly racial and the state had failed to offer a compelling justification.
The court stated that the redrawn electoral boundaries had deliberately targeted minority voters to diminish their political power, arguing that Republicans who controlled the state legislature and governor office in 2011 placed too many African-Americans in two districts with the aim to dilute the strength of voters.
Calling the move "a watershed moment in the fight to end racial gerrymandering," former attorney general Eric Holder said North Carolina's maps "were among the worst racial gerrymanders in the nation.”
Additionally, civil rights groups in the United States applauded the court ruling noting that North Carolina officials had violated the proportional rule of voting-age populations in the US state.
"The Court made it clear that it would not allow states to get away with unlawful racial gerrymandering by claiming that it's just politics. This is a critical decision as communities prepare for the 2020 redistricting," said Kristen Clarke, with the Lawyers' Committee for Civil rights Under Law.
The court found that the ruling obliged the North Carolina legislature to redraw the maps, which will have significant potential implications for the 2018 midterm elections.
Source:Press TV
Share to
Related News
FBI investigates hate crime in black student's fatal stabbing
Tornado in central US states
Students walk out during Pence's speech at University of Notre Dame
Tags
US ، Supreme Court ، congressional
Your Comment