1000s hold anti-Trump protest in Brussels ahead of NATO summit

TEHRAN, May 25, YJC -Thousands of people have staged a protest in Brussels against US President Donald Trump, who is in the Belgian capital for talks with the leaders of the European Union (EU) and the North Atlantic Treaty Organization (NATO). 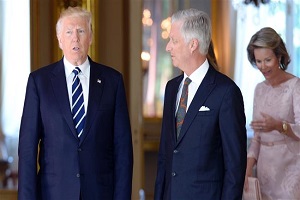 TEHRAN, Young Journalists Club (YJC) -Some 12,000 demonstrators marched through Brussels and filled the central Bourse Square of the capital on Wednesday just hours after Trump touched down for the high-stakes meetings with allies.
Waving banners and carrying blond-haired effigies of the US president, the protesters chanted "Trump not welcome.”
Police put the number of demonstrators at around 9,000.
Participants in the rally also voiced their anger at previous remarks made by the businessman-turned-politician who derided the Belgian capital as a "hellhole” ruined by immigration.
"He called Brussels a hellhole and yet he comes here like a conqueror,” a left-wing protester said.
The Wednesday protest was staged under tight security control and was peacefully passed off.
The US president met Belgium’s King Philippe and Queen Mathilde later in the day, then held talks with Prime Minister Charles Michel.
He is now meeting with heads of EU institutions in Brussels ahead of the NATO summit, which is due to open at its headquarters in the city later in the day.
During his election campaign late last year, Trump was harshly critical of NATO, describing the 28-member Western military alliance as "obsolete.”
He had denounced its effectiveness in the fight against terrorism and complained that other members are not contributing enough to the NATO budget.
Trump later reversed his position after meeting with NATO Secretary General Jens Stoltenberg at the White House in April.
Under a 2014 agreement, each NATO member should set aside two percent of their GDP for military purposes. However, only the US, Britain, Estonia, Greece and Poland have so far been able to meet the target.
Speaking to media before the summit, Stoltenberg said the Western military alliance would join the US-led coalition purportedly fighting Daesh terrorists in Iraq and Syria.
He also said NATO would expand the role of its AWACS surveillance planes in supporting what is called anti-Daesh operations and step up its training programs in Iraq.
Source:Press TV
Share to
Related News
Greece insists debt deal still possible, no plan to disburse without loans
Iraq begins operation to liberate last Daesh-held Mosul region
Estonia expels 2 Russian diplomats, Moscow slams ‘hostile act’
UK stops sharing Manchester attack intelligence with US
UK police hunt Manchester bomber's network, angered by U.S. leaks
Erdogan: We’ll wish Turkey-based German troops happy journey if they leave
Tags
trump ، brussels ، NATO
Your Comment