TEHRAN, May 25, YJC - A senior Iranian commander vows the Islamic Republic will continue to strengthen its defensive missile might in the face of security threats facing the nation, saying the country has built its third underground missile production facility in recent years. 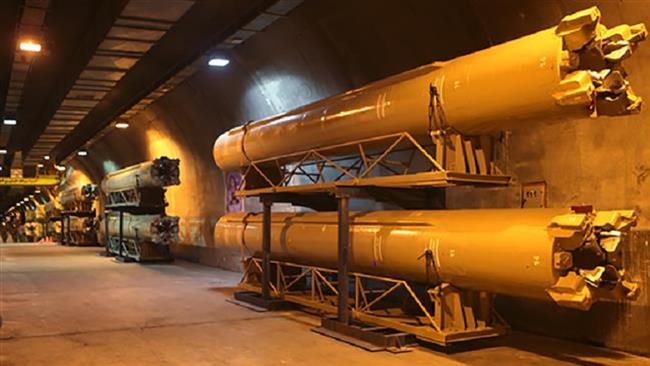 TEHRAN, Young Journalists Club (YJC) - Speaking at a Thursday ceremony in the southwestern city of Dezfoul, Commander of the Aerospace Division of the Islamic Revolution Guards Corps (IRGC) Brigadier General Amirali Hajizadeh praised Iran’s achievements in the defense sector, including missiles, drones, radars and electronic warfare.
He said the "effective power” of Iran’s missile industry has prompted the country’s enemies to oppose Tehran’s possession of the know-how.
"All the basic material for manufacturing [missile] shells and producing fuel, etc for missiles are fully designed and manufactured at home by Iranian experts,” the commander pointed out.
He underlined the Islamic Republic’s determination to continue to develop its missile might and noted, "It is natural for the US and Israel to be concerned and nervous over our missile production, missile tests and the display of our missile cities as they always want the Iranian nation to be in the position of weakness.”
"I hereby announce that in recent years the third underground missile production factory has been inaugurated by the IRGC,” added the commander.
In January 2016, the Islamic Republic of Iran Broadcasting (IRIB) aired exclusive footage of the Islamic Revolution Guards Corps’ (IRGC) deep underground tunnel filled with numerous Emad ballistic missiles.
IRGC's first underground missile facility was unveiled on October 14, 2015.
On Friday, the United States Department of Treasury to impose sanctions on two Iranian defense officials, an Iranian company, and members of a China-based network for supporting Iran’s ballistic missile program.
The move marked the second one of its kind under US President Donald Trump, who was inaugurated in January.
The US claims Iran’s missile work is in breach of United Nations Security Council Resolution 2231, which endorsed Tehran’s nuclear deal with the P5+1 states in 2015.
Tehran has repeatedly said its missiles are not designed to carry nuclear warheads.
Iran responded to the new sanctions on Thursday by slapping bans on nine American individuals and firms over their blatant human rights violations.
Share to
Related News
Nothing can prevent Iran from pursuing defense right: Qassemi
Official: Iran to unveil ground-to-ground ballistic missile soon
Rouhani: Iran not heeding to enemies' remarks on missile program
Iran’s Missile power has nothing to do with the JCPOA: Armed Forces General Staff
Defense minister declares 100x rise in Iran’s arms production capacity
Iran equips IRGC Navy with new anti-ship cruise missiles
Tags
Iran ، underground ، missile
Your Comment