TEHRAN, May 26, YJC - Israeli authorities have agreed to a deal with the Palestinian prisoners who have been on hunger strike in Israeli jails over the past 40 days. 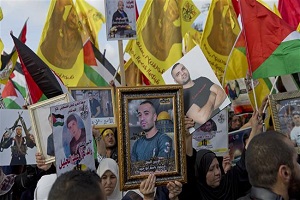 TEHRAN, Young Journalists Club (YJC) - Issa Qaraqe, the head of the Palestinian Committee of Prisoners’ Affairs, confirmed the deal on Saturday.
Other informed sources also said that the hunger strikers were now halting their protest action.
More than 1,600 Palestinian prisoners were participating in the hunger strike, dubbed the Freedom and Dignity Strike, which started on April 17. The strike was led by Marwan Barghouti, a jailed leader of the Palestinian Fatah movement.
The hunger strikers were demanding appropriate medical care and treatment in Israeli prisons, as well as an end to solitary confinement and the so-called administrative detention, which is a form of imprisonment without trial or charge.
There had lately been rising concerns about the health conditions of the Palestinian inmates, too; some of them had been taken to hospital with deteriorating health.
Not all of the details of the Saturday deal were immediately clear. Some Israeli media outlets said that, under the agreement, Palestinian prisoners would be allowed two monthly family visits instead of one, but it was not known which of the other demands of the Palestinians had been met.
On Friday, Palestinian demonstrators had turned out on the streets in the occupied West Bank and blockaded Gaza Strip to express their solidarity with the hunger strikers. Israeli forces clashed with the demonstrators.
A Palestinian was injured with a live bullet and 11 others suffered tear gas inhalation during the scuffles in the West Bank town of Beita near the city of Nablus.
Additionally, the West Bank village of Qalandiya and the city of Khan Yunis in the Israeli-besieged Gaza witnessed similar clashes.
Some 6,500 Palestinians are currently being held in Israeli jails, 536 of them arbitrarily, according to figures provided by the Palestinian prisoners’ rights group Addameer in January. Palestinian inmates complain that they have been subjected to assault and torture at Israeli prisons.
Source:Press TV
Share to
Related News
Israel must keep West Bank military control under any deal: Netanyahu
Only Iran, Syria helped Lebanon when it was occupied by Israel
Israel in hysteria mode amid Trump visit
Palestinians reject Trump’s visit, call for day of anger
Tags
palestinian ، israel ، hunger
Your Comment