The founder of the WikiLeaks website, Julian Assange, has defied a demand by Ecuador — which has granted him asylum and shelter at its London Embassy — to steer clear of politics in the Latin American country. 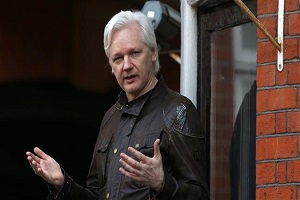 TEHRAN, Young Journalists Club (YJC) - Assange has leaked secret Washington-related wires on WikiLeaks. And he could be arrested and extradited to the United States for prosecution if he leaves the Ecuadorean diplomatic premises, where took shelter back in 2012, when Sweden issued a European arrest warrant for him over sexual assault charges.
Ecuadorian President Lenin Moreno (seen below) on Thursday called on Assange "not to interfere in Ecuadorian politics, nor in the politics of its allies.”
"His (Assange’s) status does not allow him to talk about the politics of any country, let alone ours,” President Moreno had said.
On Friday, however, Assange tweeted, "Ecuadorians can be confident that if WikiLeaks receives evidence of corruption in Ecuador it will be published.”
Sweden recently dropped its investigation against Assange, potentially creating an opportunity for him to leave the Ecuadorian embassy. But British police, who have 24/7 presence around the perimeters, said they would still arrest Assange if he came out because he had broken his conditions for bail by not surrendering himself to the police before.
President Moreno had previously said his country "will ensure” that Britain "allows the transfer of Mr. Assange to Ecuador or to the country in which he wishes to reside.”
But Assange’s new defiance toward Ecuador’s newly-elected president could now dim his chances for a smooth travel to and stay in Ecuador.
Source:Press TV
Share to
Related News
Ecuador president calls WikiLeaks founder ‘inherited problem’
UK refuses Ecuador request to grant Assange diplomatic status
Assange posts meme of ax-wielding Clinton over DNC deal revelations
Assange hits back at CIA, calls it ‘dangerously incompetent’
WikiLeaks denies opening back-channel for longtime Trump associate
Assange to agree to US extradition if Obama grants Manning clemency
Tags
assange ، ecuador ، politics
Your Comment