TEHRAN, May 28, YJC -Anti-government protesters have clashed with police in Venezuela’s capital, Caracas, as unrest continues in the Latin American country. 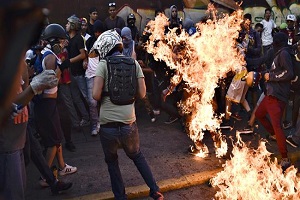 TEHRAN, Young Journalists Club (YJC) - The protesters threw Molotov cocktails at police officers after they blocked the Francisco Fajardo highway in east Caracas with trucks on Saturday.
The protesters, who had covered their faces so as not to be identified, set fire to several vehicles on the highway. Police reportedly used tear gas and rubber bullets against them.
Anti-government protests have been going on in Venezuela for months. The protesters demand that President Maduro step down and a new president be elected in an early election.
Maduro, for his part, has convened a constituent assembly to rewrite the constitution to address growing political unrest. That move has only further angered the protesters and the opposition, which has refused to take part in rewriting the constitution.
Some 50 people have died in the violence in the unrest in Venezuela over the past weeks.
People have also been protesting high inflation as well as food and medicine shortages. The opposition and its supporters blame Maduro’s leftist government for the crisis.
The left-wing government, however, says the protests are incited by the United States.
Both sides accuse one another of resorting to violence.
Source:Press TV
تعداد بازدید : 10
Code
Download
Main Quality
Share to
Related News
Venezuelan opposition calls for nationwide strike
Venezuelan foreign minister resigns to seek seat in planned Constituent Assembly
Maduro rebukes Pence for meddling in Venezuela's internal affairs
Fresh protests rock Venezuela after man set on fire
Fresh protests rock Venezuela after man set on fire
200,000 protesters march against Venezuela’s Maduro
Tags
protesters ، violent ، venezuela
Your Comment